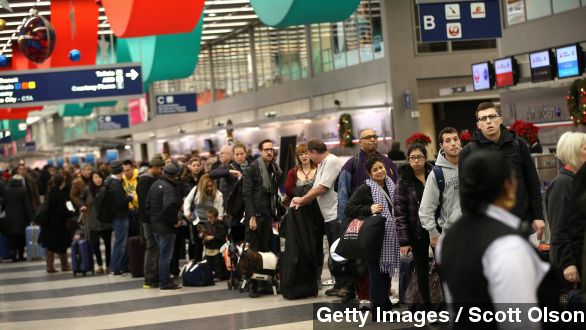 SMS
More People Are Flying, But Airline Prices Aren't Dropping
By Jamal Andress
By Jamal Andress
March 11, 2015
According to a report from an airline lobbying group, more people will fly this spring compared to this time last year, so why aren't prices dropping?
SHOW TRANSCRIPT

It seems Americans have decided it's time for a good old-fashioned vacation. And they're not driving to their final destinations — they're flying.

According to a report from lobbying group Airlines for America, there will be 134.8 million passengers flying in the air in March and April this year. That rounds out to about 43,000 more people compared to springtime last year.

Perhaps more importantly, this is the most travelers we've seen flying the friendly skies since 2007, before the financial crisis gripped the American public.

In addition to the fantastic spring 2015 numbers, airlines had a pretty good 2014 as well. When averaged together, the ten largest publicly traded American airlines recorded a 4.6 percent net profit margin — that's $7.3 billion. The sharp dip in oil prices has played a huge role in taking the strain off most airline budgets.

Airlines for America attributes the better than expected numbers to "rising U.S. employment and personal incomes, an improving economy, the highest consumer sentiment in a decade and the continued affordability of air travel."

But that last part about affordability, not everyone agrees with.

"My biggest complaint, is the only thing they're not changing is the prices — they're just going up. Try booking some airline travel in March and April as I have been doing, the prices are shockingly high," said a CNBC anchor.

In 2014, airlines across the country payed themselves with record profits ...

"I've got Wi-Fi and power outlets right at my side, but best of all are the fully flatbed seats," said a man in a promotional video.

... buying new planes, installing Wi-Fi on more flights, etc. But they never got around to lowering ticket prices. (Video via United Airlines)

Since oil prices found the floor back in January with barrels trading between $40 and $50, prices have begun to rise again, which could possibly cut into airlines' profits before any of them get around to lowering ticket prices.