Trump Is Taking A Page Out Of Sanders' Campaign Financing Strategy 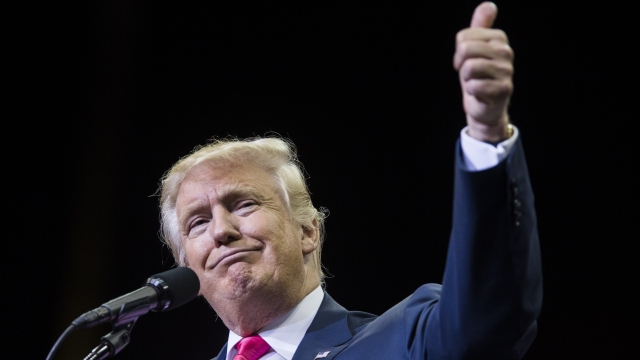 For a majority of the 2016 presidential race, Trump has been at a major disadvantage in regards to fundraising.

But donations last month have all but erased that gap. Trump, along with the Republican National Committee, raised an estimated $82 million in July.

The Washington Post reports $64 million came from small donations solicited online and through direct mail. Another $16 million was raised through top-dollar fundraising events held by the RNC and $2 million was donated by Trump himself.

Which is only slightly behind Clinton, who raised a reported $90 million in conjunction with the Democratic National Committee.

Trump's finance chairman was quoted in The New York Times, saying, "She’s been doing this for 20 years, we've been doing it for two months."

The small donations surge signifies a shift in Trump's campaign. Previously, funds were raised through T-shirt sales and donations made by Trump himself, among other efforts.

Trump has put roughly $50 million into his presidential bid. He said in a campaign video in January, "I'm totally self-funding my campaign."

While the grassroots donations mark a shift in funding efforts, they actually reflect the approach taken by Sen. Bernie Sanders before dropping out of the race. A majority of Sanders' campaign was funded by individual contributions.

The figures released by the Trump campaign were preliminary. NPR reports official numbers will be filed at the Federal Election Commission later this month.

This video includes clips from C-SPAN, CNN and Fox News and images from Getty Images.