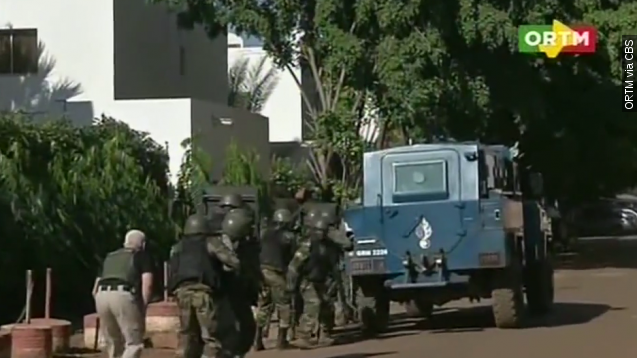 The government of Mali has declared a 10-day state of emergency following a terrorist attack on a hotel which left at least 20 people dead.

According to the Radisson Blu Hotel's owners, at least two men armed with assault rifles locked 140 guests and 30 employees inside the building Friday morning. Some of the hostages later fled or were released by the attackers. (Video via BBC)

Mali special forces stormed the hotel and freed the remaining hostages; authorities report two gunmen were killed in the counterassault.

Various foreign nationals staying at the hotel were caught up in the violence. The U.S. State Department has confirmed at least one American was killed during the attack, and Chinese state media reports three Chinese citizens were killed.

Two Islamist groups have claimed to be jointly responsible for the attack: Al Qaeda in the Islamic Maghreb, and the Mali-based terrorist group Al-Mourabitoun, which was responsible for a similar hotel attack back in August which killed 19 people.

A 2012 coup has left Mali struggling to battle an Islamist insurgency in the north of the country. The country has relied on international help to suppress the insurgency — most notably from France, which still has 3,500 troops still stationed in Mali.