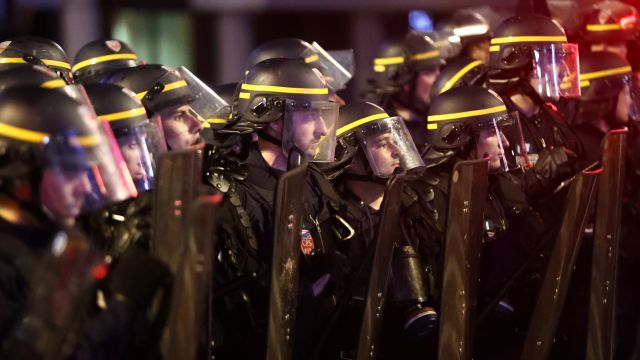 Euro 2016 fans have once again clashed with French police.

On Wednesday, at least 37 fans were arrested and another 16 were taken to the hospital after disputes spilled onto the streets of Lille, France.

"None of us were causing any trouble. Nothing was getting thrown. Nothing was being said," one fan told the BBC.

The BBC reports: "You've got a line of riot police here, you've got another one here and they're trying to keep the English fans on the move. It's not a good night for English supporters here. It doesn't put them in a good light."

Police unleashed tear gas, bangers and flares to disperse the disruptive crowd of soccer fans. They also threatened to use a water cannon but never did.

It's unclear exactly what fueled the violence, though reports say England fans are predominately to blame. Fans of Russia also reportedly got involved in sparring with England fans.

It also all happened before England's game against neighboring Wales on Thursday.

While these types of clashes aren't anything new at this year's UEFA tournament, police say they're mostly trying to control the crowd of drunks than a crowd who's bent on causing violence.

Still, fans are treading on thin ice. Earlier in the week, England and Russia fans got into fights in the stadium and in the streets of Marseilles.

The fighting injured at least 35. As a result, multiple fans were arrested, 20 Russians are being deported and UEFA threatened to eliminate both teams if violence continued.

UEFA has not yet forcibly kicked out either team following Wednesday's clash.

This video includes a clip from London Live and images from Getty Images.