More Casualties In Mali After Rockets Strike U.N. Base 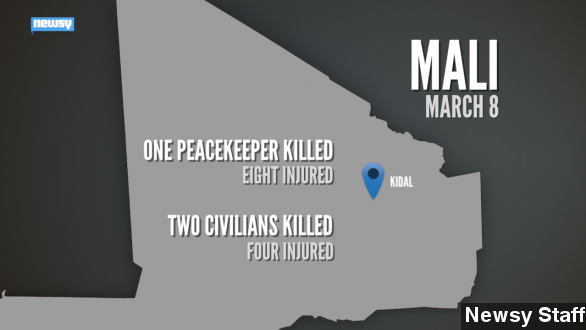 SMS
More Casualties In Mali After Rockets Strike U.N. Base
By Evan Thomas
By Evan Thomas
March 8, 2015
At least three people were killed in a Sunday morning rocket attack on a U.N. base. No group has claimed responsibility for the incident so far.
SHOW TRANSCRIPT

At least three people are dead after a rocket attack on U.N. peacekeepers in Mali Sunday morning.

Unidentified attackers fired some 30 rockets toward the U.N. base in Kidal in the northern part of the country. One peacekeeper died, and eight others were injured. Stray rockets killed two civilians.

In a statement, the U.N.'s Mali branch condemned the attacks and announced it would increase security.

The U.N. could not identify the attackers, and no group has claimed responsibility so far.

But Mali's army has fought Islamist rebels in northern Mali and throughout the country for years. (Video via BBC)

Islamist groups took credit for violence earlier this weekend in the south: A gunman killed five people in a suspected terrorist attack at a nightclub in the capital, Bamako, Saturday.

French President Francois Hollande condemned that "cowardly act." France is the former colonial power in Mali and still contributes about 3,000 troops to peacekeeping operations in the country. (Video via Deutsche Welle)

Voice of America reports France is now working with Malian officials to increase its security activities in the region.