More And More, Hurricane Katrina Is Portrayed As A Blessing 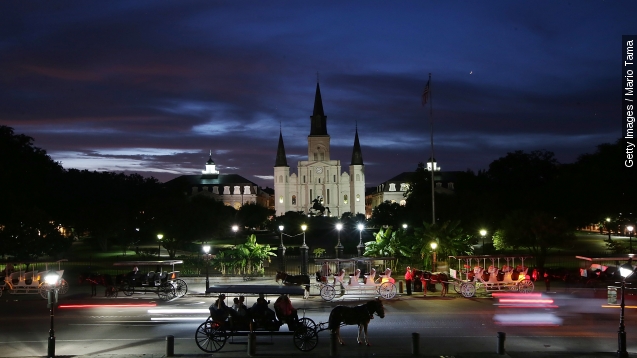 SMS
More And More, Hurricane Katrina Is Portrayed As A Blessing
By Matt Picht
By Matt Picht
August 23, 2015
Katrina devastated New Orleans, but the recovery gave officials the chance to test business-friendly reforms — although the growth has been uneven.
SHOW TRANSCRIPT

Before Hurricane Katrina made landfall in 2005, then-Mayor Ray Nagin warned the city, "This is the storm that everyone has feared for New Orleans for many, many years." (Video via NOAA)

In the aftermath of the storm, journalists captured New Orleans' descent into chaos. Shots of flooded streets, helicopter rescues, survivors trapped on rooftops and the scenes of human misery at refugee shelters like the Superdome defined New Orleans post-Katrina.

"I've never seen anything in my life like this. I can't put it into words the amount of destruction that is in this city," NBC cameraman Tony Zumbado said.

New Orleans has had ten years to recover from that devastation, and many parts of the city have been radically revamped in that time. But the city's actual recovery can be hard to gauge — it's largely dependent on where you look.

Rebuilding the city's broken infrastructure gave New Orleans officials an opportunity to experiment with new ideas. The city converted its failing public schools into charter schools, demolished and rebuilt its public housing, and encouraged a wave of entrepreneurship.

Supporters credit these reforms for the city's rapid population growth, wealth of new jobs and startups and improving performance of students on standardized tests. And several observers have also congratulated New Orleans for the dramatic improvement its made since Katrina.

Some people have taken the praise for New Orleans too far. A Chicago Tribune columnist was immediately pilloried after she wished for a Katrina-like reset for the government in her home city.

But other outlets point out neighborhoods that haven't seen much improvement. New Orleans' bold reforms are often accused of excluding or leaving behind the city's poorest residents, and polling shows black residents have a much bleaker outlook on the future of New Orleans.

"So what we're seeing is growing income inequality as many of our white households are doing much better but black households are not. ... It's interesting down here, if you talk to folks, it's almost like a tale of two cities," demographer Allison Plyer told WBUR.

While there's still a lot of recovery work left to do, New Orleans officials are using the tenth anniversary of Hurricane Katrina to reflect on the progress they've made so far.

Mayor Mitch Landrieu told The National Press Club, "We've shown what's possible. That from the worst disaster there can be rebirth. Out of despair, there can be hope; out of darkness, light; out of destruction, beauty."