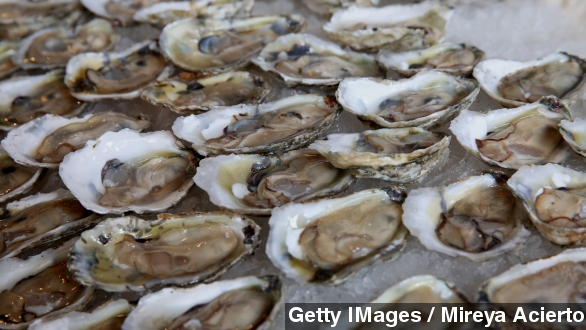 Shellfish, and the communities that live off them, could be under greater threat from climate change than we thought.

An increasing amount of carbon dioxide in the atmosphere means more ocean acidification, and it could spell disaster for some species of shellfish. (Video via South Carolina Department of Natural Resources)

Ocean acidification, or OA, happens when carbon in the atmosphere is absorbed into the ocean, causing a chemical reaction, lowering the pH level of the water and stunting the development of shellfish, particularly mollusks' shells. (Video via National Oceanic and Atmospheric Administration)

Now a study, published in the journal Nature Climate Change, says some communities are particularly vulnerable because OA will happen more quickly than projected, due to local amplifiers.

The study lists communities on the Gulf of Mexico and along the East Coast as the most socially vulnerable to this acidification.

For example, in the Gulf, the study points out over reliance on one species of oyster, the eastern oyster, could hurt communities there if they don't diversify. (Video via National Wildlife Federation)

But on the East Coast, some communities have already mobilized. And in Maine, the state government has even created a commission to study the effects acidification will have on its shellfish industry and better prepare for it. (Video via America's Heartland)

Other regions are already feeling the effects of acidification, especially the Pacific Northwest.

The Seattle Times has reported extensively on the huge impact acidification has had on Washington's shellfish industry, and the state estimates OA has cost the region some $110 million and jeopardized 3,200 jobs.

Diani Taylor, of Taylor Shellfish Farms told The Story Group: "It's something that we truly experience and deal with on a day-to-day basis. It's not something that's going to happen potentially in five to 10 years."

But the study's authors argue the region has been able to identify and adapt to the threats of acidification through science, and that could serve as an example for other threatened communities.