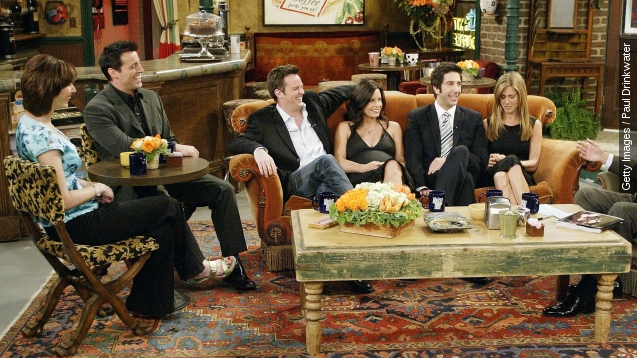 We're just weeks away from seeing what maybe, possibly could've happened behind the scenes of the '90s hit "Full House."

"I say we hire a bunch of strippers and install a pole right here," fake Bob Saget says in a newly released clip. (Video via Lifetime)

So we got to thinking and came up with three other '90s shows we'd love to go behind the scenes of.

First up: "Boy Meets World." Cory and the gang had everything on that show. (Video via ABC)

A little teen love, some teen fighting and some old people with really good advice.

"Believe in yourselves, dream, try," Mr. Feeny says in the series finale.

So we'd have to assume the fighting and loving went on backstage too, especially in the younger years. (Video via ABC)

All that love over 10 years had to produce some real-life fights. And it probably pitted the actors against the creators. (Video via NBC)

Co-creator Marta Kauffman has even sort of called out the cast for the $1 million an episode they were getting toward the end of the series. Oh, to be a fly on the wall during those negotiations.

And last but definitely not least: "The Fresh Prince of Bel-Air." (Video via NBC)

If you were a huge fan like I was, you may have noticed Aunt Viv changed it up a little bit between seasons three and four.

"You know, Miss Banks, since you had that baby, there's something different about you," DJ Jazzy Jeff says in a season four episode. (Video via NBC)

The first matriarch, Janet Hubert, was famously fired from the show and has even talked about a backstage feud between her and Will Smith.

"If you want me to kiss your butt, you have got to put it in my contract. He did some heinous, horrible things to me," Hubert told "The Insider."

You can't tell us that wouldn't make some good TV.

But really we just want to know which genius came up with the "Carlton."