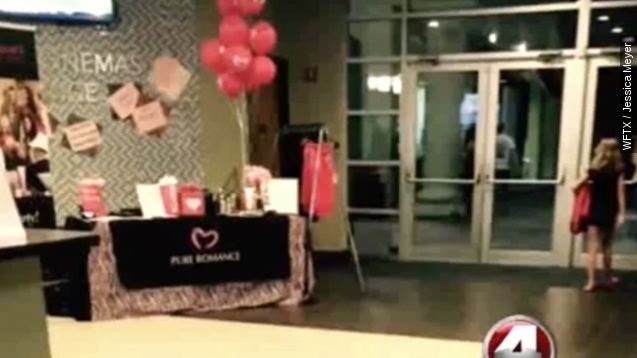 Taking your kids to the movie theater is pretty run-of-the-mill.

Especially when fun movies geared toward kids like "Inside Out" are in theaters.

As a mother told Newsy's partners at WFTX, she was taking her 10-year-old daughter and her 11-year-old niece to see that flick, but instead she saw:

"I don't understand how any management or any theater would think that that would be appropriate. ... With lingerie and toys and lotions and oils and all those types of things, with balloons and stuff, so it was eye catching, especially for children," concerned mother Jessica Meyer told WFTX.

It happened at the Prado Stadium 12 Theatre in Bonita Springs, Florida.

And it was meant to promote "Magic Mike XXL."

"I got a little treat for you all tonight. We're gonna see if he's still got a little magic in that Mike," said someone in the film.

Yeah, that racy movie you may have seen trailers for. As for the company selling those toys?

Pure Romance provides sex toy parties for women in their own homes. And the website even gives tips on stripteasing. Very much an adult company.

The theatre did email Newsy's partners a statement, saying Pure Romance wasn't there for long and nothing else is planned with the company. But Meyer says it should have been planned better: