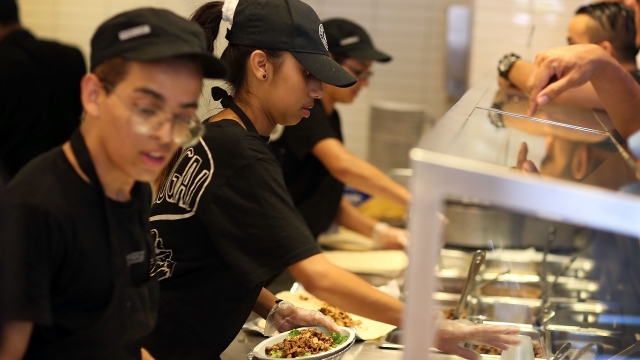 The news comes from a Harris Poll survey that assesses how people feel about certain restaurant brands.

This year, Chipotle didn't even rank in the top four after claiming the No. 1 spot the past three years in a row.

That loss of consumer faith probably had a lot to do with several Chipotle restaurants throughout the country being linked to E. coli and norovirus infections.

The company shut down all of its locations across the country for a day back in February to deal with its food safety issues.

Chipotle tried to lure customers back by mailing promotions for free burritos. The company reports two-thirds of the coupons were redeemed.

But the damage was apparently already done. Chipotle reported sales at stores open more than a year fell 30 percent in the first quarter of 2016.

One analyst told USA Today: "Brand perception is down. In retrospect, I just don't think they did enough to convince customers that Chipotle food was safe to eat."

And it looks like Moe's reaped some benefits from Chipotle's misfortune. A survey from an analytics firm called Placed found Moe's saw a 5 percent increase in visitors when Chipotle was struggling with health concerns.

This video contains clips from Chipotle Mexican Grill and Moe's Southwest Grill and images from Twitter / @Moes_HQ and Getty Images.