What You Should Know About One Of The Weirdest Olympic Sports 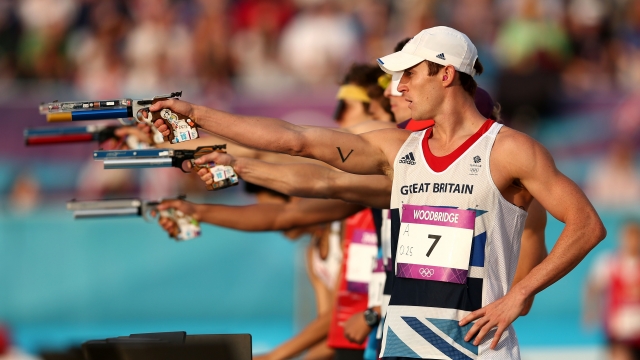 SMS
What You Should Know About One Of The Weirdest Olympic Sports
By Carter Woodiel
By Carter Woodiel
August 6, 2016
The event has been around for over a century, but you've probably never watched it. So why is it still in the Olympics?
SHOW TRANSCRIPT

SEE MORE: Taiwan Has To Use A Different Name, Flag and Anthem For The Olympics

"Nobody, like, wakes up in the morning and thinks, 'Right, I want to be a pentathlete,'" British modern pentathlete Samantha Murray said. "It's just such a random mix of sports."

Did we mention the shooting and the running happen at the same time? And since the 2012 Olympics, the runners just stop what they're doing and start firing at a target.

If you're wondering what the five events have to do with each other, there's a reasonable explanation.

When modern pentathlon broke into the Olympics in 1912, it was meant to showcase the skills needed for a good soldier: things like combat with swords, riding an unfamiliar horse and swimming and running over the course of battle.

But today, modern pentathlon is struggling to remain a part of the Olympic program — mainly because not that many people care about it.

In 2013 the International Olympic Committee surprisingly chose to drop wrestling from the Olympics, despite that sport's thousands of years of history. Many fans argue modern pentathlon should have been dropped instead.

Even though wrestling was put back in the games months after it was booted, modern pentathlon is still around, and how it got started is a big reason why.

It was created by the founder of the modern Olympics, Baron Pierre de Coubertin. He envisioned the sport as a sort of culmination of the games' athletic feats.

And even though that's not entirely how it worked out, the modern pentathlon still enjoys some of the Olympic spotlight. The flag bearer for the host nation Brazil at this year's opening ceremony was a modern pentathlete.