Model Responds To 'Fat Cow' Comment By Covering Herself In Food 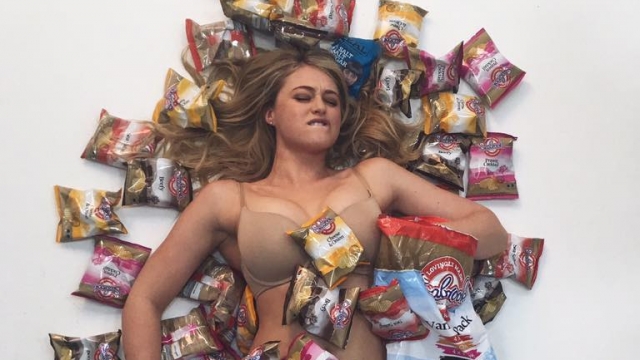 SMS
Model Responds To 'Fat Cow' Comment By Covering Herself In Food
By Melissa Prax
By Melissa Prax
April 7, 2016
Model Iskra Lawrence responded to an Instagram user who called her a "fat cow" by posting a picture of herself covered in bags of potato chips.
SHOW TRANSCRIPT

A British model fought back against nasty comments on social media in the most delicious way possible. No, really.

In response to one comment, which called Iskra Lawrence a "fat cow," the model posted a picture of herself in her underwear surrounded by bags of potato chips. The caption? "This is for anyone who has ever been called FAT."

Lawrence models for Aerie, among other companies, and has done Q&A social media sessions dealing with topics like body appearance.

"People tell me all the time on social media hateful things, but it doesn't affect me," Lawrence said.

She also regularly uses the hashtag #everyBODYisbeautiful in her posts.

And Lawrence isn't the only model promoting a healthy body image while rocking her curves. Others, like Ashley Graham, have graced the covers of fashion magazines all over the world to change the way the industry views the female body.

This video includes clips from Aerie and Runway Riot and images from Facebook / Iskra Lawrence and Instagram / theashleygraham.