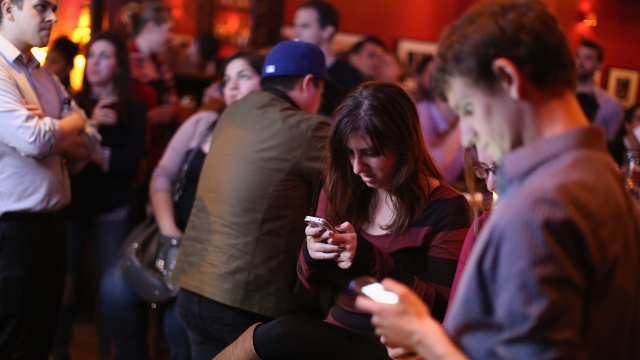 SMS
Mobile Apps Lead To Spike In Number Of Young Adults Who Date Online
By Bell Johnson
By Bell Johnson
February 14, 2016
The number of people ages 18 to 24 using mobile dating apps has increased by more than 15 percent in the past three years.
SHOW TRANSCRIPT

Young adults ages 18 to 24 are now nearly three times more likely to use online dating sites and mobile dating apps than they were three years ago, according to a new study.

Researchers at the Pew Research Center who conducted the survey think the increasing reliance on smartphones and the rollout of more dating apps could be reasons for the spike.

The author of the study told NPR the easy nature of the apps and the "light, game-ified way of engaging with other people" is why they've gained so much popularity.

He also said it could be related to recent college graduates who "may not have very deep social networks in the city they live in. Or maybe they work long hours and don't have a lot of time to go out and meet people in the bar or in various places after work."

Historically, that age group hasn't had much of a need for online dating because of their close proximity to other singles in high school, college or work.

Whether it's the ease of use or the entertainment of swiping left, the study says 34 percent of young adults know someone who has found a long-term relationship via online dating.

This video includes clips from Tinder, Coffee Meets Bagel, Once, Plenty of Fish and Happn.