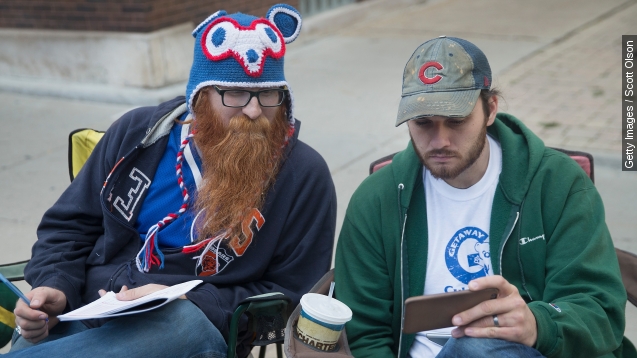 SMS
MLB's In-Market Streaming Doesn't Let You Cut The Cord
By Carter Woodiel
By Carter Woodiel
November 20, 2015
MLB fans can look forward to streaming games in half of the teams' local markets, but they'll need to prove they have a cable package.
SHOW TRANSCRIPT

Tech-savvy baseball fans know the drill by now. If you're looking to stream an MLB broadcast in the U.S., you're out of luck if you're in the media market of one of the teams playing. Now, for half of MLB fans, that's changed.

MLB Commissioner Rob Manfred announced Thursday the league has reached a three-year agreement with Fox Sports to stream in-market games for the 15 teams that broadcast on regional Fox Sports Networks. (Video via The Dallas Morning News)

That means now you can stream your local team in-market if you see a Fox Sports logo during their broadcasts or if you're a Yankee fan who watches the Fox-owned YES Network.

You'd think in-market streaming would be great news for fans looking to ditch their cable provider, but it's not that simple.

Unlike out-of-market streaming, which is available through the league's MLB.TV subscription service, in-market games will be streamed on Fox's streaming service, Fox Sports Go.

This is important, because to watch games on Fox Sports Go, you need to provide your login info for your cable or satellite provider — essentially proving to Fox you haven't cut the cord.

The agreement is the latest step forward in the struggle between a league that wants to get more streaming baseball to fans and regional networks that want to protect their product.

It isn't a coincidence the Toronto Blue Jays, the only team to offer in-market streaming last year, are owned by the media entity that broadcasts their games. (Video via CBC)

As for MLB clubs that aren't on Fox, like teams under the Comcast umbrella, Manfred says the league is in talks with their networks, working on getting those streams up and running as well. (Video via Fox Sports)

The league has good reason to keep up the fight. According to one report from the Sports Business Journal, Fox's in-market streaming deal could mean an extra 4 percent in yearly revenue for the teams involved.