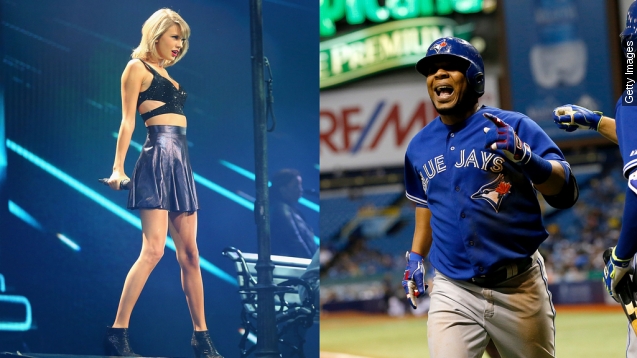 Baseball has a way of making people illogical. Perhaps in no other professional sport are traditions more closely guarded, lucky streaks protected at all costs and — this is a big one — superstitions heeded.

This is, after all, the sport where many fans believe a single trade or expelling a goat from the stadium caused decades-long championship droughts. That’s where Taylor Swift comes in.

Baseball fans in Toronto don’t want her there.

"They love Taylor Swift and I love the Blue Jays, so this is not good news before the concert," one father said.

"Do you think the curse might mean anything?" CTV’s reporter asked.

The curse that young Blue Jays fan was referring to is the recently dubbed "Taylor Swift Curse," a nod to losing streaks baseball teams endured this summer shortly after the pop star visited their cities. (Video via Big Machine Records / Taylor Swift)

And, of course, Swift’s 1989 tour rolls through Toronto just as the Blue Jays are about to start the playoffs for the first time in 22 years. (Video via Warner Bros. Television Dist. / "The Ellen DeGeneres Show")

The curse presumably started in Washington, D.C., where the lights at the Nationals’ ballpark went out, canceling a July game against the Dodgers.

And maybe the curse would’ve never gained traction but for a tweet from star pitcher Max Scherzer joking he now had bad blood with Swift who’d been the last to use the park for a concert.

Since then, the Nationals, Padres and Astros have all been unable to — sorry about this — shake off losing streaks after Swift’s concerts. (Video via Big Machine Records / Taylor Swift)

For the record, Swift’s first Toronto concert at the Blue Jay’s home ballpark coincided with an 8-4 road win Friday night. So it’s all superstitious nonsense … we think. (Video via XFINITY)