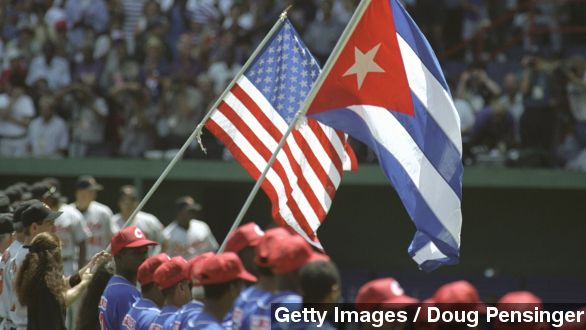 "Today, America chooses to cut loose the shackles of the past, so as to reach for a better future. For the Cuban people. For the American people," President Barack Obama said.

Ever since President Obama said those words, baseball fans have been eager to see how smoothed relations between the U.S. and Cuba could benefit their sport. And Thursday, they were given a hint of possible things to come.

In an interview with The Wall Street Journal, MLB commissioner Rob Manfred said the league will "most likely" play an exhibition game at ballpark on the island nation sometime during spring training next year.

Manfred told the Journal he's proud to "play a role in helping the United States government effectuate a change in policy," adding, "It’s not a three-day exercise to play a meaningful exhibition game in Cuba. You need a little lead time to get that done."

The last time the MLB played a game in Cuba was 1999 when the Baltimore Orioles went up against the country's national team in exhibition play.

In the grander scheme of things, sending a major league team to Cuba for a game could be a kind of diplomatic move.

MLB teams have not been allowed to scout talent on the island nation since the U.S. and Cuba severed ties in 1961, even though many of those players end up sneaking out of the country to join a team in the U.S. anyway. (Video via PBS)

And the communist nation has definitely served as the breeding grounds for many young talents over the years. (Video via ESPN)

Many of of whom, like Dodgers All-Star Yasiel Puig, have even risked their lives on dangerous journeys to defect from their homeland to the U.S. Improved relations between the two countries could change all that.

Even with Manfred's intentions, it's still unclear if or when anything will change in the way baseball scouting and recruiting works between the U.S. and Cuba. Congress would likely have to get involved for any real change to take place. (Video via Bloomberg, NBC)