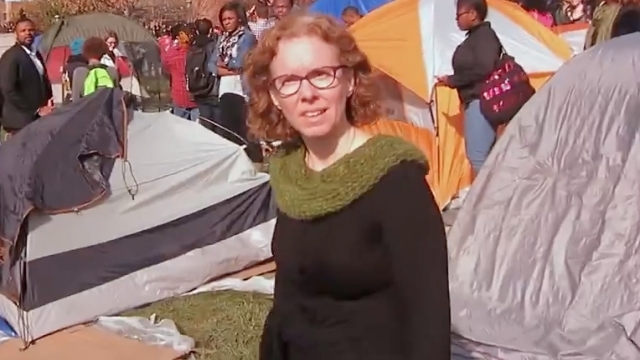 SMS
Mizzou Professor Fired After Protest Confrontation
By Eugene Daniels
By Eugene Daniels
February 25, 2016
Melissa Click was on suspension since January, but a vote was taken to fire her Wednesday evening.
SHOW TRANSCRIPT

"You need to get out!" Melissa Click told a student back in November.

University of Missouri Assistant Professor Melissa Click has been fired in connection with this video from a campus protest last November and another video filmed at an October parade.

Click had been suspended since January pending an investigation, but Wednesday night the UM Board of Curators voted to fire her.

Click was charged with assault for this interaction with a Mizzou student during protests at the university back in November. Prosecutors agreed to drop the charge as long as Click follows through with community service and probation requirements.

The board released a statement Thursday saying Click's behavior demanded "serious action." MU's interim chancellor added: "Her actions in October and November are those that directly violate the core values of our university. I can assure you ... that there has been fairness in this process and investigation."

Click says the report from that investigation doesn't tell the whole story and "omits a number of crucial descriptions and events that give context to my actions."

In recent weeks, Click has been on somewhat of an apology tour both locally and nationally to tell her side of the story.

"I'm hoping that the people who will watch this interview will be able to identify with saying something in a hectic and flustering moment that they didn't mean," Click told KMIZ.

But so far, Click hasn't responded to the termination.

This video includes images from Getty Images and clips from KQFX, CBS and KOMU.