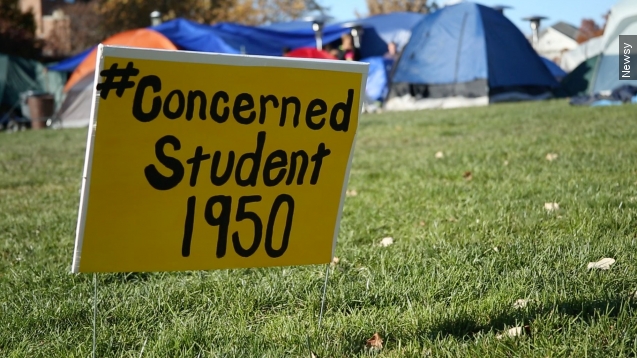 SMS
Mizzou Faculty Plan Walkout As Racial Protests Continue
By Matt Moreno
By Matt Moreno
November 9, 2015
A statement to the Columbia Missourian said faculty will walk out on classes Monday and Tuesday in support of the Concerned Student 1950 movement.
SHOW TRANSCRIPT

Calls for University of Missouri President Tim Wolfe to step down continue to grow louder as the school's faculty plan to walk out on classes Monday and Tuesday.

In a statement to the Columbia Missourian, the faculty said, "We, the concerned faculty of the University of Missouri, stand in solidarity with the Mizzou student activists who are advocating for racial justice on our campus and urge all MU faculty to demonstrate their support by walking out."

Students on the Mizzou campus say they're protesting Wolfe's lack of response to a string of racist incidents on campus.

Grad student Jonathan Butler started a hunger strike Nov. 2, refusing to eat until Wolfe is removed. The football team joined late Saturday, and the story has since made headlines all over the country.

Mizzou faculty have been supportive of the Concerned Student 1950 movement thus far.

"The absolute, No. 1 message I want the students to hear is the faculty hears them and that we are with them — some of us physically and others of us in our minds and in our hearts. They are showing tremendous courage, great class," Ben Trachtenberg, associate professor of law, told Newsy.

The statement on the walkout was reportedly sent by associate professor Elisa Glick from the school's English department.

The English department submitted a vote of no confidence in the school's chancellor, R. Bowen Loftin, last week.

It's unclear which faculty members and how many will be involved in the walkout, but it adds even more pressure to Wolfe's job security.

The UM System released a statement Sunday calling for change, but did not make any mention of a possible resignation or removal of Wolfe as president.

This video includes images from The Maneater.