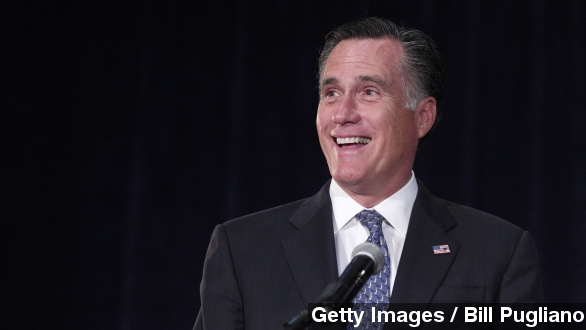 We won't see Mitt Romney battling in a presidential race in 2016, but it looks he will be going up against Evander Holyfield in a boxing ring in the near future.

Yup, Romney will fight the former heavyweight champ at a charity event in Salt Lake City May 15.

The 2012 presidential nominee told The Salt Lake Tribune, "It will either be a very short fight, or I will be knocked unconscious. It won't be much of a fight. We'll both suit up and get in the ring and spar around a little bit."

The event will raise money for CharityVision, a group that provides healthcare to people with vision problems in impoverished areas around the globe.

Romney and his family have been involved with the group for a while now. Last year, they traveled to Peru with the group to help diagnose and treat eye problems.

The Salt Lake Tribune is getting credit for breaking the story Monday, but it actually broke three days earlier when the champ went on Fox Business Friday.

"What's this about a fight with Mitt Romney? It's not real," said host Stuart Varney.

"I just got to talk Mitt into showing up," replied Holyfield.

"I just want him to stop hiding because he's going to get the whooping."

Guess everyone was too busy ogling a gator or playing "Where in the world is Vladimir Putin" Friday to notice.

There will be two other fights at the charity event which will feature boxing professionals, because, let's face it, the Holyfield-Romney fight probably won't last very long.