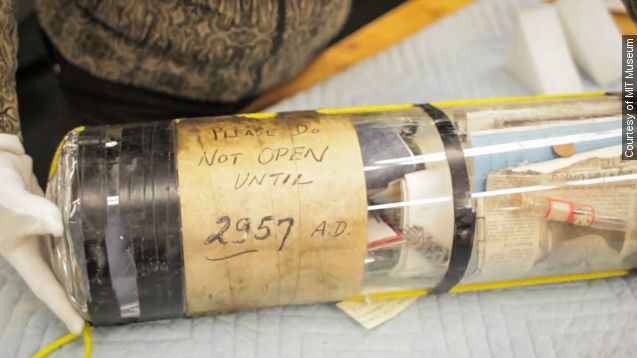 Some people at the Massachusetts Institute of Technology need to learn the value of patience. The school opened up a time capsule 942 years before its intended opening date.

The capsule was found during construction of a new MIT building. Clearly visible, right there, was a note that says do not open until 2957 but the MIT researchers "weren't sure if they were serious or not and went ahead and broke into it."

And this was not your typical time capsule. Buried in 1957, the contents were stored in a glass cylinder filled with argon gas to protect it. (Video via MIT)

Inside were documents about science and technology at the time. There were also relics like coins from the First National Bank of Boston and a keepsake mug from the Class of 1957.

MIT isn't alone in prematurely opening time capsules. In 2013, a Philadelphia elementary school unearthed one 55 years early. It had been buried in 1968.

But there's a perk to jumping the gun. Time capsule contents can be ruined because of flooding. Take the John F. Kennedy Peace Capsule, which was opened in September of this year.

It is possible to hold out, though. Earlier this year a more than 200-year-old time capsule buried by Paul Revere and Samuel Adams was opened.  (Video via CNN)

The contents were in surprisingly good condition — but then again, 200 years isn't much compared to a millennium. (Video via USA Today)

Who knows what would have happened if MIT had waited to open the capsule. And it's not like the school is facing a shortage — Deborah Douglas, director of collections for the MIT Museum, said eight known time capsules are buried on campus.