Missouri Rep.'s Plan To Cut Welfare A Product Of Tradition 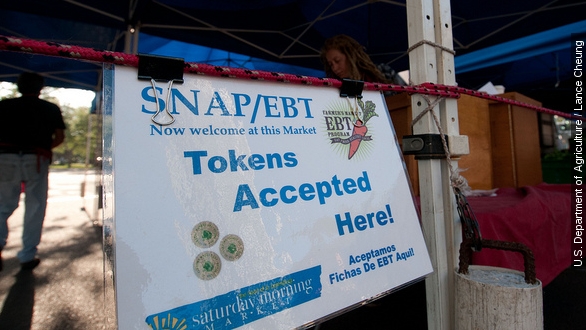 In 1976, Ronald Reagan said, "In Chicago, they found a woman who holds the record. She used 80 names, 30 addresses, 15 telephone numbers, to collect food stamps, social security, veterans benefits for 4 non-existent deceased veteran's husbands, as well as welfare. Her tax-free cash income alone has been running $150,000 a year."

With that speech, then-candidate Ronald Reagan brought the term "welfare queen" to the national stage and ushered in a generation of conservative skepticism of the modern welfare program.

Now the latest conservative to take on the mantle of welfare reform is Missouri state representative Rick Brattin.

He's proposed a bill that would ban welfare recipients from purchasing steak, seafood, and some junk-food with their Supplemental Nutrition Assistance Program, or SNAP, money.

Brattin's bill follows a line of legislators worried about SNAP spending on expensive food — like what was shown in a 2013 Fox News feature.

"All paid for, by our wonderful tax dollars," Jason Greenslate told Fox News.

The network called that California surfer the "new face of food stamps."

But liberal outlets like Media Matters took issue with that report, accused Fox News of focusing on a case that wasn't representative of the majority. It accused that report as "designed to provoke hostility to the idea of nutritional assistance programs."

Studies have found less than 2% of recipients aren't actually qualified for what they receive.

"Today, 1 in 6 Americans is food insecure. That means 49 million people in the U.S. lack access to enough nutritious food for an active, healthy life." (Video via Feeding America)

So who actually uses SNAP? About forty seven million Americans — that’s one in seven people. And three out of four of those households include a child, a person over 60, or a person with disabilities. The average SNAP household received about $287 per month in  FY2011, or $4.30 per person per day.

Practically since the beginning of government assistance programs, there have been moral restrictions on welfare.

In the 1930’s, that led to laws concerning the types of families that received assistance, including rules that disqualified unmarried mothers living with men. Most of those family structure policies were done away with by the 1960s and ‘70s.

Then those family-based restrictions were replaced by ones based on crime and drugs.

During the Clinton Administration, Clinton undertook major welfare reform. Part of that reform put a lifetime ban on people convicted of drug felonies. It also put in place a 5-year lifetime welfare limit, and made assistance work-conditioned. (Video via C-SPAN)

Some states have imposed or considered drug testing for welfare recipients. Florida governor Rick Scott implemented such a program in 2011.

Only about 2.6% of Florida welfare recipients tested positive for narcotics, whereas drug use in Florida generally is about 8%. And, the program cost more money to implement than it saved. A federal judge found it unconstitutional in 2013.

There are also state-level restrictions on the types of things people can spend their SNAP money on, including alcohol, tobacco, gambling and adult entertainment. Generally, guns are not included on that restricted list.

This latest effort in Missouri has been criticized for being ill-defined. Mark Rank, professor of social work at Washington University, told The Washington Post, "I don't see how it makes any sense to ban some of these foods. Fish is something that should really be in your diet."

In response, Brattin told the Post the language does need tweaking, saying, "My intention wasn't to get rid of canned tuna and fish sticks."

This video includes images from Getty Images and the U.S. Government.