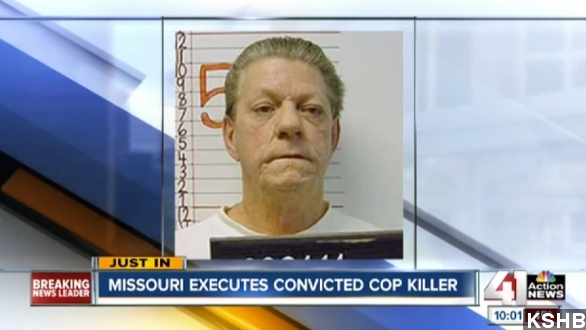 Seventy-four year old Clayton was put to death by lethal injection after the U.S. Supreme Court rejected a stay request. Clayton's lawyers pleaded with the high court to spare his life.

Clayton's attorneys claimed a 1972 sawmill accident lead doctors to remove the part of his brain that controls impulses, which they say significantly impaired his mental functioning and judgement leading up to the murder. They say he was also battling dementia. (Video via MSNBC, KTVI)

Clayton's attorney expressed disappointment in a statement recorded by NBC, "Cecil Clayton had — literally — a hole in his head. Executing him without a hearing violated the Constitution, Missouri law and basic human dignity."

Clayton was administered the lethal injection at 9:13 p.m. local time in Bonne Terre, MO. He was pronounced dead at 9:21 p.m.

Clayton's death marks Missouri's second execution this year. The state put 10 people to death in 2014, its highest yearly total since execution was reinstated in Missouri in 1976.