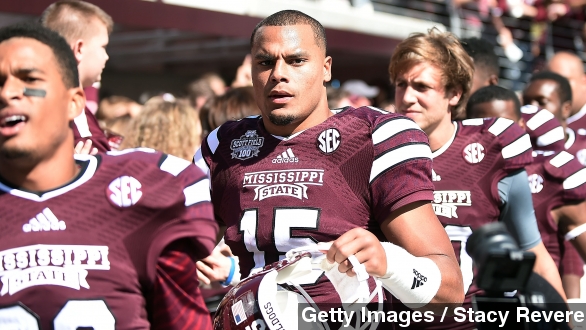 Mississippi State Bulldogs quarterback Dak Prescott was attacked at a concert in Florida while on Spring Break with some teammates in Panama City. (Video via Twitter / Domonic Smith, @domonics)

The Clarion-Ledger says Prescott, backup quarterback Damian Williams and defensive lineman Torrey Dale were headed back to Starkville after "they were jumped by a group of men at a Waka Flocka concert."

Prescott did tell the Twitterverse Monday he was "okay" and "ready to be back in Starkville." He wrote "Ignorance happens!" and told people to be safe, thanking them for their prayers.

A spokesman for MSU said the attack was unprovoked.

A local radio producer posted a text from a witness that said he or she "had no clue of the instigator or why it happened." It also said Prescott took a bottle to the face during the fight.

No one was seriously injured and police say no charges have been filed.