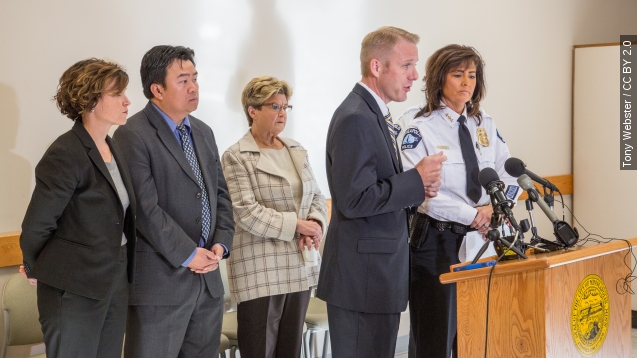 We won't see surveillance video from the shooting of Jamar Clark in Minneapolis anytime soon, according to local law enforcement.

"Several videos related to this incident have been obtained, none of which capture the event in its entirety," Minnesota's Bureau of Criminal Apprehension superintendent Drew Evans said. "Releasing them would impact the integrity of the investigation that is ongoing currently."

Bureau of Criminal Apprehension superintendent Drew Evans added that there is no dash cam or body cam video of the shooting.

But we now know names of the officers who shot and ultimately killed the unarmed 24-year-old. Officers Mike Ringgenberg and Dustin Schwarze were involved in the shooting. (Video via KMSP)

Police were responding to reports of an assault early Sunday morning and claim Clark interfered with paramedics. Clark was then shot after scuffling with officers. He died Monday evening, and the local medical examiner's office listed the death as a "homicide." (Video via KSTP)

One of the biggest questions surrounding the shooting death of Clark is if he was handcuffed. Authorities said handcuffs were found at the scene, but investigators are still trying to figure out if Clark was restrained.

Meanwhile, protests continue at the Minneapolis Police Department as demonstrators demand more information from and accountability of law enforcement. The FBI has opened a civil rights investigation into Clark's shooting.

This video includes images from Getty Images, Tony Webster / CC BY 2.0 and Fibonacci Blue / CC BY 2.0.