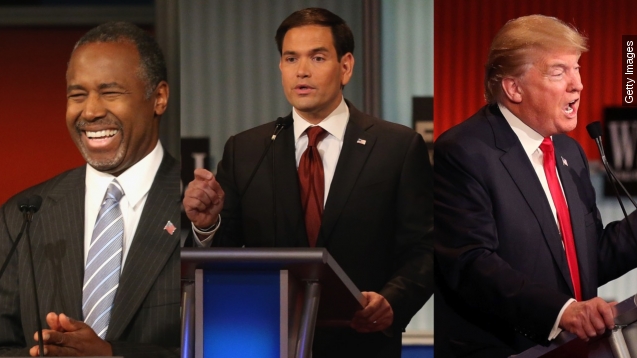 Three presidential candidates made it clear: raising the minimum wage is not an option.

“I hate to say it, but we have to leave it the way it is. People have to go out, they have to work really hard and they have to get into that upper stratum,” frontrunner Donald Trump said.

Sen. Marco Rubio also weighed in saying, "If you raise the minimum wage, you're going to make people more expensive than a machine."

It's a stark contrast to the "Fight for 15" protest that happened just hours earlier. Workers at McDonald's stores around the country walked out demanding the minimum wage be raised to 15$

The protests are nothing new and have actually led to change in Los Angeles and New York. By 2020, L.A. will have phased in a $15 minimum wage and New York Governor Andrew Cuomo says state workers will be paid that amount over the next six years.

And while the candidates got some big applause in the debate, raising the minimum wage to at least $10 is popular. A poll by the Pew Research Center last year found 73% surveyed supported that increase.

But not every GOP candidate is against a raise. Senator Rick Santorum does support an increase of 50 cents. (Video via Caffeinated Thoughts)