Mini-Nuke Claim, Like Most From North Korea, Hard To Verify 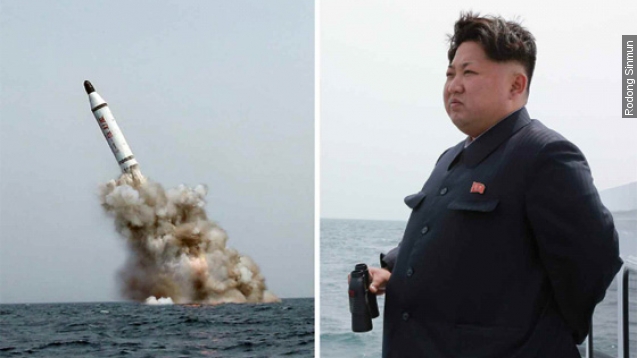 SMS
Mini-Nuke Claim, Like Most From North Korea, Hard To Verify
By Cliff Judy
By Cliff Judy
May 20, 2015
North Korea said Wednesday it's long been able to miniaturize nuclear weapons, a key development in building an intercontinental ballistic missile.
SHOW TRANSCRIPT

It's been an eventful month for Kim Jong-un and North Korea, beginning with the Hermit Kingdom's claim it successfully launched a ballistic missile from a submarine.

Now, the DRPK is saying it can miniaturize its nuclear weapons — a key development in building a nuclear intercontinental ballistic missile. (Video via ODN)

State-run news agency KCNA posted this statement from North Korea's military Wednesday. Translated, a portion reads, "It is long since the DPRK's nuclear striking means have entered the stage of producing smaller nukes and diversifying them."

Call the rest of the world skeptical, however. North Korea has boasted of its military capabilities before only to see its claims later debunked. Some are already poking holes in the submarine-launched missile claim. (Video via Yonhap News TV)

"One of the things the North Koreans do is they don't test their missiles, so they can't have very great confidence in something like this," said Vice Chair of the Joint Chiefs of Staff Adm. James Winnefeld on Tuesday. "Again, if it launches and it doesn't work, boy, they're in such trouble because we will have seen their intent." (Video via Center for Strategic & International Studies)

During that speech and Q&A session Tuesday, Vice Chair of the Joint Chiefs of Staff Adm. James "Sandy" Winnefeld also told the crowd the sub images were altered:

"They have not gotten as far as their clever video editors and spinmeisters would have us believe."

But the mini-nuke claim might have more legitimacy behind it. The commander of U.S. forces in Korea Curtis Scaparrotti said in October he believed North Korea was capable of producing a miniaturized nuclear device. (Video via The Pentagon Channel)

Also Wednesday, the United Nations' Ban Ki-moon said his previously announced plan to visit an industrial park operated by both North and South Korea was canceled because the North had rescinded approval for his visit. (Video via United Nations)

This video includes images from Getty Images and Rodong Sinmun.