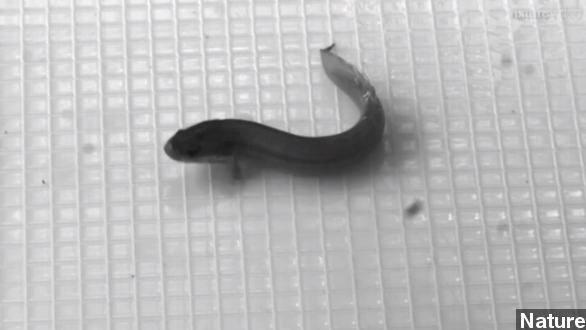 Taking fish out of water — it's an expression that describes something that literally shouldn't work. But for some scientists, it apparently has.

This is the Senegal  bichir... and it's walking. Researchers took the fish from a young age and forced them to live on land for 8 months, in conditions that were humid enough that they could survive. (Video via Nature)

The study found the fish — which were previously known to move on land only incidentally — could adapt to walking on land.

Basically, what the study wanted to look at was how tetrapods — four-legged creatures — first pulled themselves out of the water and made that "Little Mermaid" switch from aquatic animals to terrestrial ones. (Video via PBS)

THE LITTLE MERMAID: "Look at you, there's something different!"
"She's got legs, you idiot!"

There are well-documented cases of fish — like the mudskipper — walking on land and even climbing trees. (Video via National Geographic)

But unlike the mudskipper the Bichir has lungs, and crucially, as the study found, their movement on land is much closer to that of the earliest tetrapods. (Video via Youtube / Joel Diaz)

Now that's due to a number of factors, including the positioning of their fins on their body, but one of the really interesting things the study charted was how the fishes' bodies adapted to life on land.

Those findings show the fish's anatomical plasticity — its ability to change and adapt its body, a trait that would've been crucial for the first fish to walk on land.

The study has also raised some more profound philosophical questions, like "If a fish could walk, would it still be a fish?"

Well the scientists who conducted the study don't really have an answer for that particular question ... yet.

This video contains an image from Me and the Sysop / CC BY ND 2.0