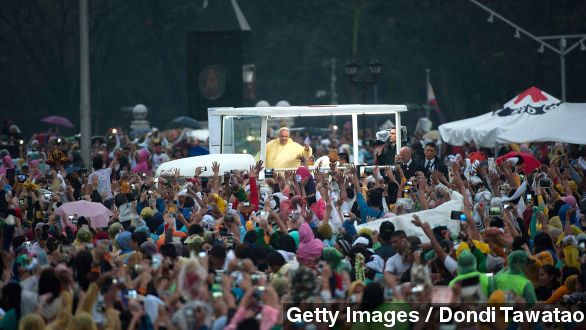 By Matt Moreno
January 18, 2015
As many as 6 million people attended Pope Francis' mass. If accurate, that's the most people ever brought together by this pontiff.
SHOW TRANSCRIPT

He's been popular ever since taking over leadership of the Roman Catholic church. Now, he may be the most popular pope in history after an estimated 6 million people attended Pope Francis' mass in the Philippines.

The pope wrapped up his tour of the country Sunday with mass in Manila, the capital city of the Philippines. Pope Francis braved heavy rain, covered up with a poncho and traveled in his windowless popemobile. (Video via Al Jazeera)

"He traveled around, stopped along the way, kissed babies, and, as I said, just got close with the people. He is a pastor. He is a pope of the people," CNN reporter Anna Coren said.

In the Philippines, about 81 percent of the country's 100 million people are Roman Catholic — giving the country one of the largest Catholic followings in the world.

Pope Francis dedicated his week long visit to the country, in part, to the victims of the 2013 Typhoon Haiyan, which killed more than 6,000 people. His visit to hard-hit Tacloban was cut short Saturday due to bad weather. (Video via Fox News)

Francis' mass crowd of six million would break the previous record of five million people who welcomed Pope John Paul II to the area in 1995.

Still, the BBC points out, there's a bit of confusion over these most recent numbers.

"Exactly how many we don't know. There is a bit of controversy over this figure. Earlier it was estimated to be about 3 million. Now they're claiming 6 to 7 million. I have to say, that sounds a bit high, but it was a very, very large crowd," BBC reporter Rupert Wingfield-Hayes said.

While Sunday's numbers were impressive, they're far from the world's largest religious gathering. That record belongs to Kumbh Mela, a Hindu pilgrimage that brought an estimated 100 million people to northern India in 2013.