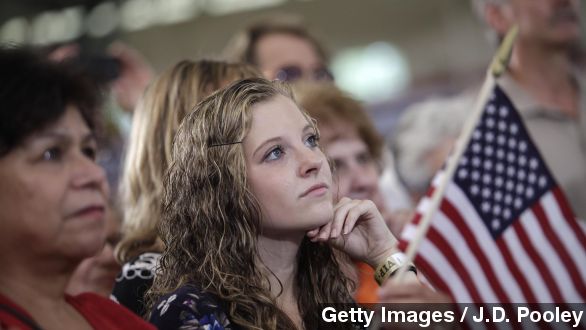 These are the headlines: "Millennials bolt Obama for GOP," "Millennials turn on Obama," "Democrats' days of winning the youth vote may be over."

But that's a little misleading. Here's why.

All those reports stem from a Harvard poll released last week. It's key finding is this: that among 18-29 year olds who said they would "definitely vote" in Tuesday's midterms, 51 percent wanted a Republican Congress and 47 percent said Democrat.

That was enough to build a new narrative in print and on cable.

FOX NEWS: "Young people tend to go with the Democrats. This time — recent poll out of Harvard — Millennials are saying they would prefer Republicans."

But that's leaving out a pretty important caveat in Harvard's poll.

Yes, 51 percent of Millennials who said they'd "definitely vote" favored a Republican Congress, but when accounting for all young people surveyed, Democrats still held a comfortable lead: 50 percent to 43.

And there's another issue: Regardless of age, the people who very likely to vote this election cycle are just more conservative across the board. You can see that in this Pew Research data.

An NBC / Wall Street Journal poll also shows Millennials leaning 10 points more to Democrats than Republicans. So, it's not as if the GOP has suddenly "won" young voters. The party just has this cycle's most eager voters of all ages.

And actually, Republicans still have a lot of issues to work through with Millennials. Pew tells us young voters are heavily progressive on environmentalism, on gay rights and on immigration — and right now, that's not where the GOP stands.