Miley Cyrus' Nude Concert Is Not For The Lactose Intolerant 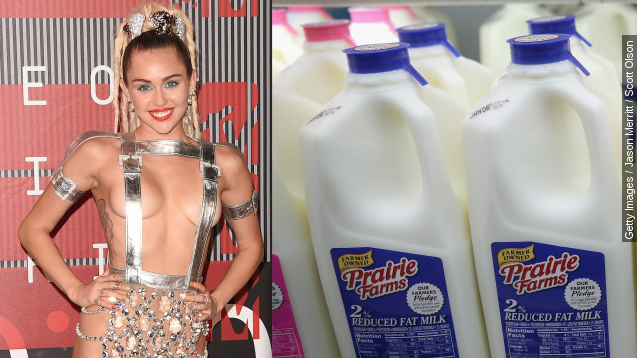 SMS
Miley Cyrus' Nude Concert Is Not For The Lactose Intolerant
By Cody LaGrow
By Cody LaGrow
October 14, 2015
Miley Cyrus is teaming up with the Flaming Lips, and they've got plans for a naked concert that will reportedly require a ton of milk.
SHOW TRANSCRIPT

Miley Cyrus is going to be naked. No. Don't leave. We swear this is a new story.

The singer is joining the Flaming Lips to perform a concert in the nude to an audience who'd consider ass-less chaps to be modest. Those watching the show will also be completely naked.

The former Disney channel darling is taking it all off (again) for an upcoming music video for her song "Milky Milky Milk."

The sexually charged lyrics give us a preview of what sort of visuals we can expect from Cyrus. The song's title alone comes from comparing breasts to the Milky Way. It's going to be quite the performance.

But here's where it gets rich: That naked audience is going to be slinging milk — drenching each other in what appears to be 2 percent. How is this even 1 percent OK?

No worries if you're lactose intolerant. According to the Flaming Lips frontman, it's just "white stuff that looks like milk." I don't know if that's supposed to be comforting, but we'll just applaud them for being inclusive. You can leave your Lactaid at home.

Cyrus is taking off what little she had on in the name of art — joining a long list of musicians who've belted in the buff. It's the sort of freedom of expression we've seen from the Red Hot Chili Peppers, Blink-182 and Alanis Morissette.

There's no word on when Cyrus and the Flaming Lips will play the nude concert con creme, but Rolling Stone predicts it could happen when the two start their six-date club tour together. (Video via TBS)

That tour kicks off Nov. 19 in Chicago, where the average high temperature for that date is 48 degrees. My heart goes out to all the exposed body parts that will be in attendance.