Mike Pence Is Fighting His Own Email Battle In Court 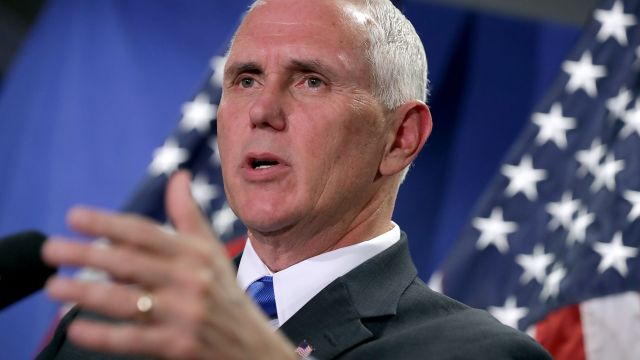 SMS
Mike Pence Is Fighting His Own Email Battle In Court

By Matt Picht
November 14, 2016
Vice President-elect Mike Pence is still facing a lawsuit over an email he received as governor of Indiana.
SHOW TRANSCRIPT

Vice President-elect and Indiana Gov. Mike Pence attacked Hillary Clinton's handling of her private emails on the campaign trail. Now, Pence is going to court to keep his own emails out of the public eye.

"What we already know here is troubling, and it's convincing millions of Americans that Hillary Clinton is just a risky choice," Pence told Fox News.

The court case stems from President Obama's executive actions on immigration back in 2014. Pence opposed Obama's policy, and Pence's administration joined a lawsuit against the White House.

Pence hired a private law firm to help fight that case, and one Indianapolis lawyer thinks that may have been a waste of taxpayer money. He's pressing the Indiana government for any information related to the hiring.

Pence's administration did turn over 57 pages of heavily-redacted information. But one item it didn't turn over was an email attachment Pence received while in office.

Pence's team argues it's protected from releasing the attachment under Indiana's Access to Public Records Act. The state's Supreme Court agreed. An appeal on the ruling is set for Nov. 21.

Paul Jefferson, a former law professor at Indiana University, told the Indianapolis Star the case's decision could weaken the judiciary's ability to check the state's executive branch. He said, "It is hard to draw clean lines between what would be and what wouldn't be if excluded from a public records request if the court is going to exempt the executive branch from public records review."