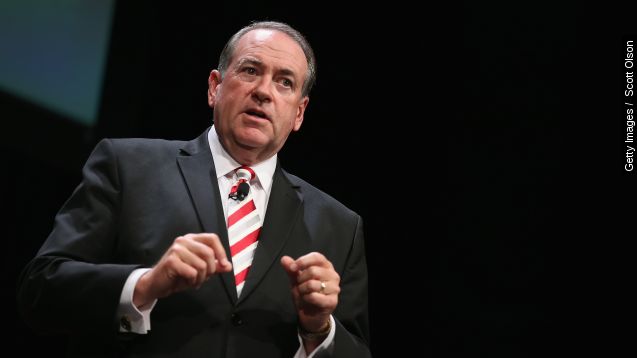 GOP presidential candidate Mike Huckabee is being scrutinized for a four-word phrase he used to describe President Obama's nuclear deal with Iran.

In an interview with Breitbart, Huckabee said: "This president's foreign policy is the most feckless in American history. It is so naive that he would trust the Iranians. By doing so, he will take the Israelis and march them to the door of the oven."

The nuclear deal's been heavily criticized by Republicans since its announcement, but Huckabee's "door of the oven" comments, an apparent reference to the Holocaust, are being blasted for going a bit too far. (Video via C-SPAN)

"He will take the Israelis and march them...oh god. Ok. Into the door of the oven. It's, it's just crass. ... I have not read it until this moment, and I am horrified," MSNBC's Mika Brzezinski said.

Huckabee doesn't appear to be backing down. He made multiple posts about it to his Twitter page including a graphic with the "door of the oven" comment bolded.

"It is a deal in which Iran will cut its installed centrifuges by more than two-thirds," John Kerry announced.