'Migrant' Or 'Refugee'? Why The Distinction Matters 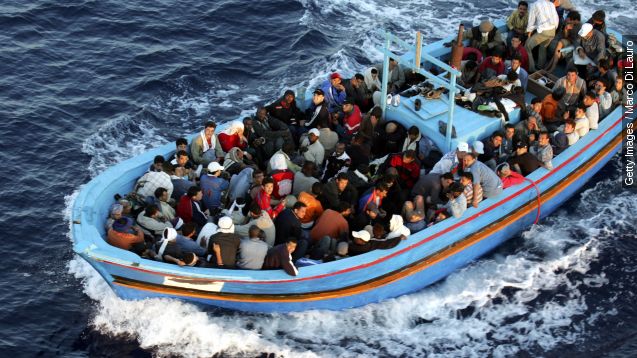 Europe is facing its biggest migrant crisis since World War II. Or is it a refugee crisis? The terms are often used interchangeably, but they shouldn’t be. (Video via U.N. High Commissioner for Refugees)

Let's get some definitions out of the way first. A migrant is typically defined as someone who moves from one country to another, usually in search of better living or working conditions. A refugee is someone fleeing war or persecution. And to throw another term into the mix, an asylum seeker is someone who has applied for asylum and is waiting to hear back. (Video via U.N. High Commissioner for Refugees)

Because there's some overlap in the definitions, a lot of news organizations have been using "migrant" as sort of a catch-all term. (Video via U.N. High Commissioner for Refugees)

"The flood of migrants in Europe has reached a massive level," an anchor for Arirang said.

"The crush of migrants escaping places like Syria ...," a CBS anchor said.

So perhaps it's not surprising that a 2014 Pew Research Center study found 40 percent of Europeans think those who settle in Europe come primarily for work, and just 18 percent think they're seeking asylum.

That's way off. The United Nations refugee agency says the vast majority of these people are fleeing war, conflict and oppressive regimes in countries like Syria, Iraq and Eritrea. (Video via U.N. High Commissioner for Refugees)

The distinction matters. So-called economic migrants are subject to deportation, whereas refugees are entitled to basic legal protections under international law. That's perhaps why some politicians are more willing to use the term "migrant."

"There are large numbers of pretty desperate migrants marauding around the area," British Foreign Secretary Philip Hammond said on the BBC.

"You’ve got a swarm of people crossing the Mediterranean, seeking a better life, wanting to come to Britain because Britain has got jobs," British Prime Minister David Cameron told ITV.

That's the position Al Jazeera has taken. The network is no longer using "migrant" in its coverage.

A well-intentioned decision, some say, but one that could "actually reinforce the dichotomy ... between the idea of the good refugee and the bad migrant."

Bottom line: There's no great way to label the 60 million people forcibly displaced. So, maybe the solution is to avoid labels altogether. (Video via U.N. High Commissioner for Refugees)

As The Guardian put it, "Why not call them people?" (Video via U.N. High Commissioner for Refugees)