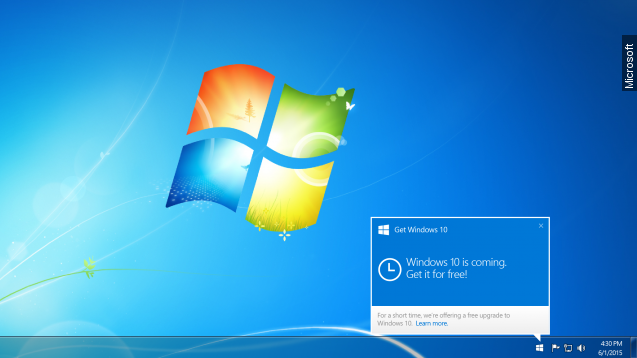 Windows 10 launches July 29 — that's 12:01 a.m. Wednesday if you're counting down the minutes until you can get Windows 8 off your computer. (Video via Microsoft)

Some slightly bad news though: If you're hoping to hit the upgrade button right after midnight, Microsoft has said it's releasing the OS in "waves, slowly scaling up after" the release date. Meaning beta testers get first dibs. (Video via Microsoft)

The Verge has said, "The intention seems to be playing it safe and making sure that Windows 10 is getting a good response and running smoothly." If that's true, Windows deserves huge props.

Because what the company is trying to do with Windows 10 is pretty bold. Microsoft is using one OS and fitting it to smartphones, tablets and computers — three very different devices that all require a different sort of interaction. (Video via Microsoft)

On smartphones, users pinch and swipe. With tablets, users tap and slide. And on computers, well, for starters there's usually a mouse or trackpad.

Setting aside the fact that Microsoft has a lot of gadgets that blur the lines between devices — for example, Microsoft's Surface — it still won't be easy to make a one-size-fits-all operating system and have a 100 percent smooth rollout. (Video via Microsoft)

But Microsoft has been planning this for years — at least that's what it seems like. (Video via Microsoft)

The company took its first step toward this all-encompassing OS with Windows 8, only it wasn't so great.

Lucky for Microsoft — and, of course, all the roughly 1.5 billion people currently using the old OS — Windows 10 has been fairly well received by beta testers.

A Yahoo tech reporter wrote, "From what we've seen so far, it looks like a seriously huge improvement."

A Gizmodo reviewer even went as far as to say, "Windows 10's new UI gestures are freaking fantastic."

And ZDNet also gave a sort of approving nod when it said, "Windows 10 runs well." But it adds the OS "could have used a bit more time to bake in the oven."

Which is, unfortunately, pretty common. No matter how many big fixes are made during the beta testing phase, there's always room for improvement.  (Video via Microsoft)

Even though Windows 10 launches in no time at all, the full OS is available as an upgrade for a full year after the launch. Which means you can take your time deciding if the improvements are good enough to take the plunge.