Microscopic Robot Fish Could Shape The Future Of Medicine 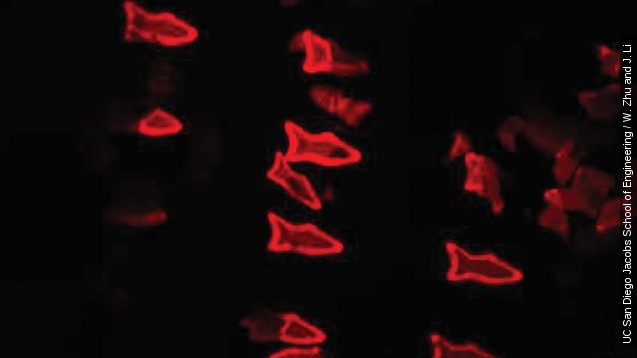 The future of internal medicine could be in the hands of some microscopic robot fish.

Yes, that would make a cool plot for Pixar's next animated feature, but it's real science, and it's happening now. (Video via Walt Disney Studios Motion Pictures / "Inside Out")

How small is that? There are 1,000 micrometers in a millimeter, so 16 microfish could fit on a coarse grain of sand.

A medical application for the fish makes sense considering the easiest way to get from one part of our body to another is through the bloodstream. (Video via Mayo Clinic, INVIVO Communications Inc.)

The microfish itself is actually made out of a gel that's been used in other medical applications, and the printing technology allows for the fish to be redesigned. The researchers tried out manta ray and shark designs in addition to the fish. (Video via University of California, San Diego)

The process of 3-D nano printing is one of the biggest boosts to the microfish's potential medical applications: You can print "a large array" of microfish in just seconds. (Video via Vienna University of Technology)

Nanorobot technology has a long history in science fiction, but research is bringing it increasingly closer to reality. The development of the microfish represents a trend toward looking to the natural world for design inspiration. (Video via Paramount Pictures / "Terminator Genisys," Wyss Institute)

But we're still a ways off "Terminator"-level nanotechnology. In the meantime, the researchers say they can see microfish applications including drug delivery and therapeutics.