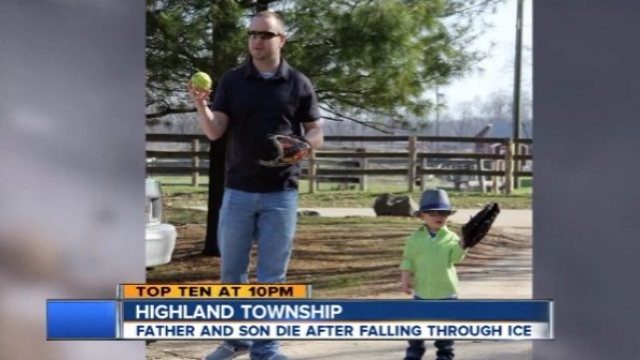 SMS
Michigan Father And 4-Year-Old Son Die After Falling Through Thin Ice
By Ryan Biek
By Ryan Biek
February 2, 2016
The pair were fishing when they fell into the lake. They were underwater for about 8 minutes, and rescuers were unable to revive them.
SHOW TRANSCRIPT

A Michigan father and son died Monday morning after falling through thin ice. (Video via WXYZ)

Newsy's partners at WXYZ report David Michael Lyons and his 4-year-old son, Jackson, were fishing near a boat dock when they fell through the ice.

They were underwater for about 8 minutes before rescue divers could pull them to safety. Neither the father nor the son were wearing personal flotation devices, and both were wearing heavy snowmobiling clothes. (Video via WXYZ)

A fire chief told WXYZ he believes the heavier clothing made the effects of hypothermia work faster.  (Video via WXYZ)

The two were rushed to a local hospital, but doctors were unable to revive them. (Video via WXYZ)

The local sheriff's office is urging people to take extreme caution and presume warm weather has made ice unsafe.