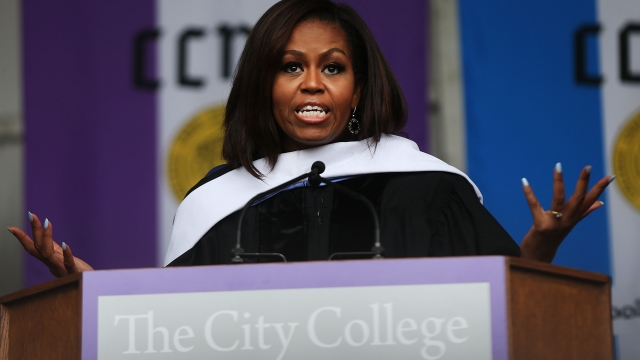 SMS
Michelle Obama Says US Doesn't 'Build Up Walls To Keep People Out'
By Samantha Crook
By Samantha Crook
June 4, 2016
In addition to criticizing Trump's aspirations of building a wall between the U.S. and Mexico, she also talked about the value of diversity.
SHOW TRANSCRIPT

Michelle Obama offered a pointed critique of Donald Trump during a commencement speech Friday at City College of New York.

"Here in America, we don't give into our fears. We don't build up walls to keep people out, because we know that our greatness has always depended on contributions from people who were born elsewhere," Obama said.

"Our greatness has always come from people who expect nothing and take nothing for granted, folks who work hard for what they have then reach back and help others after them," she said. "That is your story, graduates. And that is the story of your families. And it's the story of my family, too. As many of you know, I grew up in a working class family in Chicago. And while neither of my parents went past high school, let me tell you, they saved up every penny that my dad earned at his city job because they were determined to send me to college."

In addition to jabbing Trump's aspiration of building a wall between the U.S. and Mexico, the first lady also spoke about the value of diversity more broadly.

Obama's comments on the significance of her own presence at the White House also got some attention.

"It's the story that I witness every single day when I wake up in a house that was built by slaves and I watch my daughters, two beautiful black young women head off to school waving goodbye to their father, the president of the United States."

The speech marked the last commencement speech Obama will have given as the first lady.