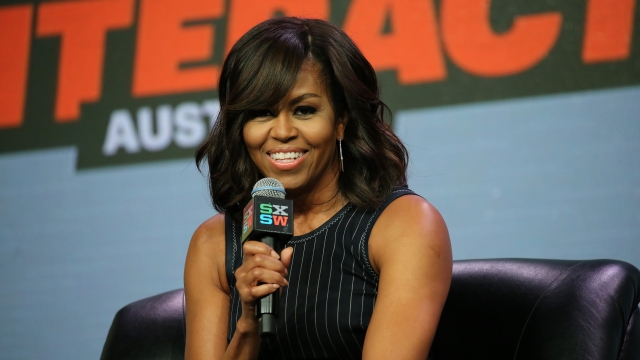 Leave it to late-night talk show hosts to ask the gutsy questions. This time, it was Stephen Colbert asking first lady Michelle Obama what she thought of the plagiarized speech Melania Trump delivered back in July.

"Do you have any sympathy, because there are, you know, people around her creating things," Colbert asked Obama on Tuesday's "The Late Show."

"Yeah, that was tough," Obama replied.

Four words: "Yeah, that was tough." That's all Obama would say when commenting publicly for the first time on the plagiarism scandal.

"From a young age, my parents impressed on me the values that you work hard for what you want in life," Melania Trump said during her speech.

"Barack and I were raised with so many of the same values, like you work hard for what you want in life," Obama said at the 2008 Democratic National Convention.

The similarities between Trump's speech in 2016 and Obama's eight years prior were uncanny.

And while Donald Trump's campaign initially tried to quash any thoughts that his wife had plagiarized, her speech writer later copped to not double-checking Obama's speech for similiarity.

The writer, Meredith McIver, wrote in a statement that she'd offered her resignation, but the Trump family would not accept it.

So far, neither Donald nor Melania Trump have had anything to say about Obama's response on CBS' "The Late Show." In fact, Melania has been staying out of the spotlight recently, both publicly and on social media.