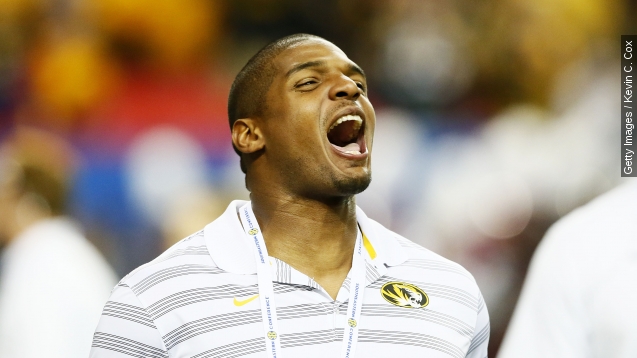 Michael Sam, the first openly gay football player drafted by an NFL team, says he's stepping away from football after a difficult year.

The former Missouri defensive lineman tweeted Friday, "The last 12 months have been very difficult for me, to the point where I became concerned with my mental health. Because of this I am going to step away from the game at this time."

It's been just over a year since Sam made his professional NFL debut in a preseason game playing for the St. Louis Rams. He's been dropped from two NFL teams since then, eventually signing a two-year deal to play in the Canadian Football League's Montreal Alouettes.

Sam's relationship with the Alouettes got off to a troubled start. He left the team early in preseason for personal reasons, and sat out the first five regular season games. His first appearance in the CFL was brief and uneventful — he was in for 12 plays and recorded no sacks or tackles.

In a statement, the Alouettes cited personal reasons for Sam's departure and said he will be placed on the team's suspended list.