Michael Sam May Get Picked Up By Dallas Cowboys 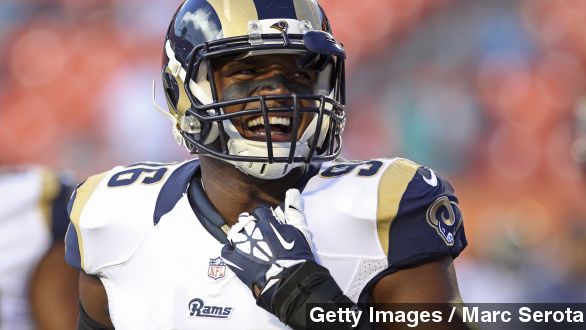 ​Days after defensive end Michael Sam was cut by the St. Louis Rams, the Dallas Cowboys are looking to pick him up.

A source for the team told ESPN Football Insider Adam Schefter that Michael Sam is expected to take a physical in Dallas Wednesday. And “if all goes well,” last year’s SEC co-defensive player of the year will join the NFL will a blue star on his helmet.

Moments later, Schefter clarified his original tweet and said Sam will only join the Cowboys practice squad to start.

But he says that could open up the door for Sam to get some in-game action down the road, as the Cowboys’ team defense has its fair share of holes.

Last season they ranked at or near the bottom in every major defensive category in the league.

ADAM SCHEFTER VIA ESPN: “You’re talking about what arguably could be one of the worst defenses, if not the worst defense, in the league, so you’d have to think that the opportunity could at some point be there.”

As with most stories Michael Sam-related, the Cowboy’s decision to bring him in for a physical and possible signing didn’t come without some controversial moves beforehand.

According to the NFL.com’s Ian Rapoport, the team reached out to several of its current players “gauging reaction” to signing the first openly gay player in the NFL.

NBC: “Just the fact that the Cowboys felt compelled to call players suggests that they are going to treat this differently than other players would be treated, and I hope we get to a point where it doesn’t matter about anything unrelated to football.”

Either way, a writer for SB Nation’s OutSports.com says the Cowboys are a perfect fit for Sam because — for one —  it was his favorite team growing up. And — two — the cultural implications could be huge.

“Culturally, this signing would be an earthquake. … For the revered Cowboys to bring him in and sign him would send a very clear message that yes, at the end of the day, the NFL is a true meritocracy. If the Cowboys make the move, this is the second team in the Bible Belt to sign Sam.”