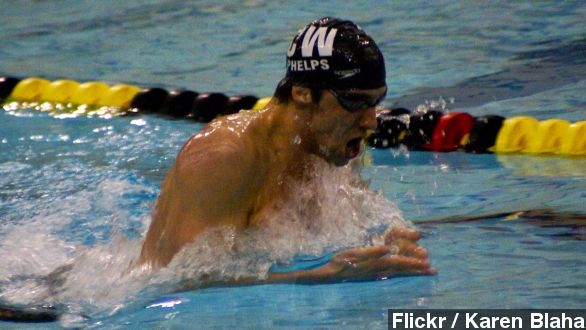 SMS
Michael Phelps Leaving 'Retirement' At Age 28?
By Matt Moreno
By Matt Moreno
April 14, 2014
While Phelps made headlines Monday for announcing a return to the pool, it seems many fans didn't realize he had retired in the first place.
SHOW TRANSCRIPT

The most decorated Olympic athlete of all time, Michael Phelps, is heading back into the pool.

Phelps is scheduled to compete in a few events at the end of the month — officially making his way out of retirement. The 22-time Olympic meda...wait. Whoa whoa whoa. Michael Phelps is retired? Really? When did this happen? (Via The Washington Post )

That's about the same reaction many people had on Twitter when it was announced Phelps would be coming out of this so-called "retirement." (Via Twitter)

I mean, he's only 28 years old, so filing for Social Security was kind of out of the question. (Via Flickr / SalFalko)

Well, it turns out, yes, Phelps has indeed been living the retired life, and he's been doing so since 2012. He told NPR it was getting tougher and tougher for him to recover from races and he wanted to travel the world.

But sounds like Phelps' 2012 retirement announcement didn't really stick in the minds of many. Twitter users made comments like, "Lol since when was Michael Phelps retired in the first place" and compared him to former Packers' QB Brett Favre who rather famously retired from the Packers ... then the Jets ... then the Vikings over the course of a few years. (Via Twitter / @kyleshulte17, Twitter / @The_Doctor774, WKZO)

It looks like Phelps will make his return April 24 for the Arena Grand Prix in Mesa, Ariz. (Via USA Swimming)

But whether we'll see Phelps going for another Olympic gold? We'll have to wait and see. The BBC quotes his coach, Bob Bowman, as saying: "He's just going to test the waters a little bit and see how it goes. I wouldn't say it's a full-fledged comeback."

If Phelps does stick around for the Olympics and qualifies, he'll compete in the 2016 Summer Games held in Rio de Janeiro.