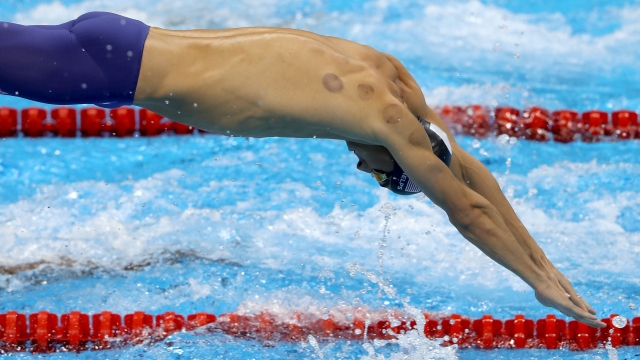 SMS
Here's What Those Red Spots On Michael Phelps' Back Were All About
By Briana Koeneman
By Briana Koeneman
August 8, 2016
Turns out those huge red spots weren't perfectly circular hickeys or pepperoni tattoos after all.
SHOW TRANSCRIPT

If you were watching coverage of the Olympics on Sunday night and wondering what the heck those spots on Michael Phelps' back and shoulders were, you weren't alone.

SEE MORE: Rio Olympics Are Shaping Up To Be Great For Michael Phelps ... So Far

And no, they weren't perfectly circular hickeys, pepperoni tattoos or the result of a fight with cookie-cutter sharks.

Turns out, the marks are actually from cupping, an ancient form of Chinese therapy. And it's not as uncommon as you might think.

Here's how it works. A therapist takes round suction cups, heats them up and places them on sore parts of the body. The suction from the cup is believed to relieve the pain by stimulating the muscles and blood flow in the area.

Phelps is a huge cupping fan. He's posted several snippets of his experiences on Instagram.

And the therapy even made its way into his Under Armour commercial.

Clearly, Phelps created quite the buzz with his cupping marks. But he's not the only Olympic athlete sporting them. U.S. gymnast Alex Naddour and Belarusian swimmer Pavel Sankovich have both been spotted with the spots.

So far, science has yet to prove that cupping truly relieves pain. But proponents of the treatment swear by it, and it's generally believed to be safe.