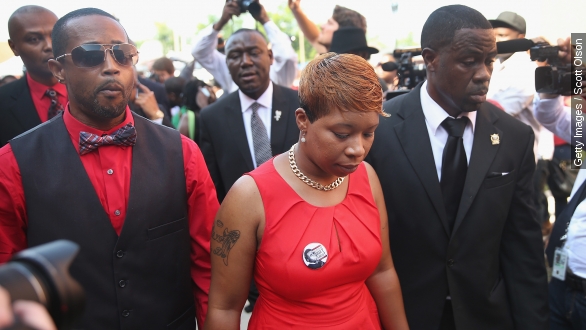 The family of Michael Brown — the unarmed black teenager who was shot and killed by a Ferguson police officer in August — announced Thursday they're filing a civil suit against the city of Ferguson, Missouri.

"Because in our opinion they cultivated the mindset, they fostered the environment that made the gunning down of Michael Brown Jr. effortless for Officer Darren Wilson," said Brown family attorney Anthony Gray.

That was Brown family attorney Anthony Gray, who more than a month ago announced the family’s intent to file a civil suit — just one day after the Department of Justice declined to charge Ferguson police officer Darren Wilson, the man who shot and killed Brown.

It's important to note this civil suit differs from a criminal suit. "The jury in the civil lawsuit will be asked to make a determination based on a lower burden of proof — one based on an abundance of evidence, rather than beyond a reasonable doubt," said CNN correspondent Ed Lavandera.

The family's attorneys say they plan to use much of the same evidence gathered previously, but again, that's with a lower burden of proof.

Attorney General Eric Holder described Ferguson as "a community where both policing and municipal court practices were found to be disproportionately harmful to African-American residents."

The lawsuit comes after a Department of Justice review found "explicit or implicit racial bias" within the Ferguson Police Department and racially charged language among city officials. Ferguson's city manager, municipal judge and police chief have since resigned.

Former officer Darren Wilson was named a defendant in the suit, which was published online by KSDK. The suit seeks $75,000 in compensatory damages as well as attorneys' fees.