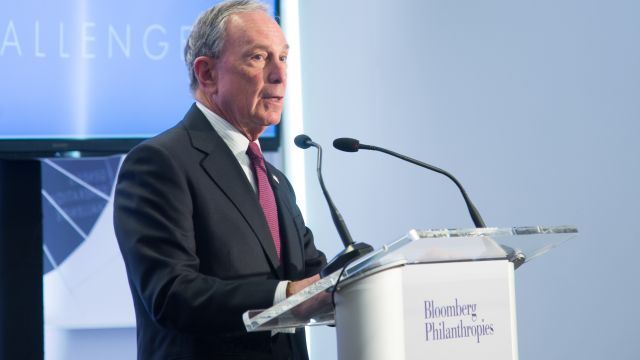 SMS
Michael Bloomberg Says Donald Trump And Bernie Sanders Are Demagogues
By Newsy Staff
By Newsy Staff
May 1, 2016
The former New York City mayor said in a commencement speech the 2016 election cycle has had "more demagoguery" than he's seen in his lifetime.
SHOW TRANSCRIPT

Former New York City Mayor Michael Bloomberg says he wants to keep demagogues out of the White House. And by demagogues, he means Donald Trump and Bernie Sanders.

"When a populous Democratic candidate promises free college, free health care and a pony, or another candidate promises to make other countries pay for our needs, remember, those who promise you a free lunch will invariably eat you for breakfast," Bloomberg said.

Bloomberg, who considered a presidential run earlier this year, made those comments and more at a commencement ceremony for students at the University of Michigan.

In his speech, he said he's seen "more demagoguery" in the 2016 election cycle than he'd seen in his lifetime.

A demagogue is "a political leader who tries to get support by making false claims and promises and using arguments based on emotion rather than reason."

Trump has faced criticism for rabble-rousing when it comes to speeches on immigration. Sanders, on the other hand, has run a campaign largely focused on breaking up big banks and is funded by small donations.

The only question for Trump is if he'll be able to win the nomination outright before a potentially contested convention.

Bloomberg hasn't officially endorsed a candidate but has spoken out against Sanders, Trump and Cruz in the past, leaving many analysts to believe he's most in support of Clinton. Bloomberg endorsed Obama in 2012.