Mexico's Other Border Problem Might Be Its Biggest One 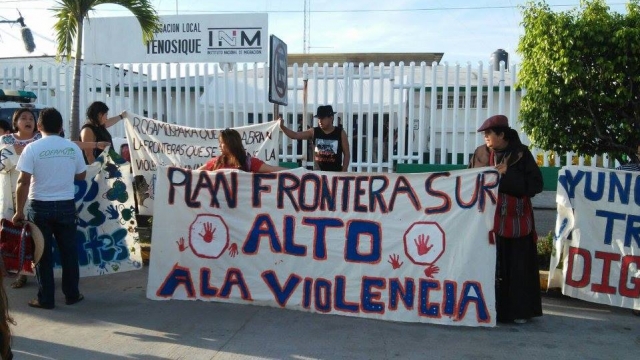 "If it were not for the hard work of Mexico, ... we would have had much bigger problems on our borders," President Barack Obama said.

But while the program was supposed to offer safeguards for those leaving their countries, human rights groups say it's actually exposed migrants to more corruption and extortion by Mexican authorities.

"Evidently, the Southern Border Program has been a success for immigration authorities in the United States because Mexico, excuse me for saying this, is doing the dirty work," said Ramón Marquez, director of migrant shelter La 72.

The Southern Border Program was announced days after President Obama declared a humanitarian crisis at the U.S.-Mexico border in 2014.

"It is a huge humanitarian crisis on the border right now," said a reporter on ABC.

U.S. lawmakers called on Mexico to secure its own border with Guatemala to help control the flow of migrants.

Mexican President Enrique Peña Nieto responded by creating the program through an executive action. In his speech, he put human rights ahead of securing the southern border.

"The Southern Border Program has a dual purpose. One, protect and safeguard migrant human rights that enter and travel through Mexico, and two, organize international crossing points," Peña Nieto said.

But the program is so vague, migrants could not only face immigration officials, but they could also be picked up by the police or even the military, neither of which has clearly outlined powers. That's made it hard to weed out corruption or to give migrants access to justice.

"Today, the extortions and violence that government officials practice on migrants have tripled. Before the Southern Border Program, someone from immigration took the 200 or 300 pesos from a migrant, and they let them go. Now, now no. Now, on top of taking what little money they have, [the officials] deport them," said Aracy Matus Sánchez, director of operations for Albergue Jesús El Buen Pastor in Chiapas.

"The officer grabbed me by the neck," one migrant told NPR. "He squeezed me hard and really hurt me. I said to him, 'Sir, with all due respect, please don't treat me that way.' That's not even how a dog should be treated."

Most cases like that aren't reported, and even fewer are investigated by the government. That's because migrants fear retaliation or don't believe their reports will make a difference.

SEE MORE: From Migrants To Refugees, Mexico's Shelters Struggle To Keep Up

"For example, from Saltillo's experience, this year we've had 56 complaints presented by migrants who have been victims of crime, and not one complaint has been consigned to the judiciary," Martinez said.

He said the government's failure to follow through on complaints is against Mexico's Immigration Act of 2012. It states officials should be dismissed if they violate good conduct, and if a migrant is "identified by the immigration authorities ... as a victim or witness to a serious crime committed in the national territory," then they're eligible for a humanitarian visa.

And Saltillo isn't the only shelter that's had unanswered complaints. La 72 is a migrant shelter in Tenosique, Tabasco, and out of the 150 abuse complaints its clients reported to the government last year, the director said not one was investigated.

"Now it's not the Maras or Zetas that push migrants from the train. Now it's the police, and they take turns. One day it's the municipal; another is the border patrol that goes on the train and pushes them off," said Sánchez.

"The reality is in many communities, citizens don't feel like they can go to the police for protection, and a lot of the time, police are part of the problem," said Maureen Meyer, senior associate for Mexico and Migrant Rights for the Washington Office on Latin America.

Human rights groups want the Southern Border Program gone. But Marquez of La 72 argues the problem is bigger than Mexico.

"Last year, El Salvador was declared the most violent country in the world. ... A few years before that, it was Honduras. So it's like a cancer that is spreading through Central America. If the structural problems in Central America aren't solved, this will never stop," said Ramón Marquez, director of La 72.