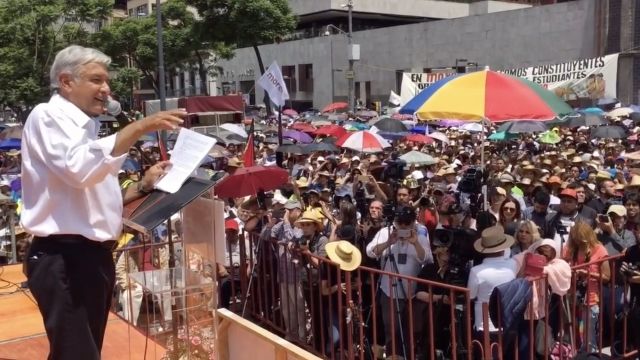 SMS
Mexico's Man Of The People Is Apparently Wealthier Than He Let On
By Ryan Biek
By Ryan Biek
September 28, 2016
Presidential contender Andrés Manuel López Obrador may own valuable property despite claiming to be pretty impoverished.
SHOW TRANSCRIPT

Running for president, in any country, is hard. It's even harder if your financial information works against you.

Just ask Andrés Manuel López Obrador. He's the leading contender for the 2018 Mexican presidential election. He's also presented himself as a man of the people. Except, he may have failed to disclose that he owns some pretty valuable property.

The left-wing politician declared his assets in August and basically said he was in poverty. He noted he didn't have a credit card — or even a checking account — and claimed he only made $31,000 a year. He also said he didn't own any property.

But the Wall Street Journal looked over public records and found López Obrador owns two apartments in Mexico City –– bought for just under $110,000 in 2002.

His spokesman claimed López Obrador has since donated the apartments to two of his sons, yet he's still listed as the owner.

The former mayor of Mexico City will want to clear up any misgivings fast. He's been leading recent polls — but with an image centered around fighting political corruption.