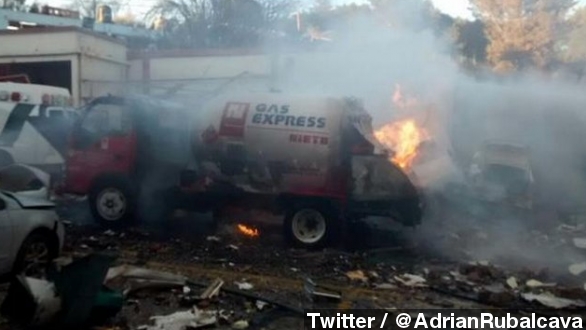 SMS
Mexico City Gas Explosion Kills At Least 2 Near Hospital
By Matt Moreno
By Matt Moreno
January 29, 2015
At least two people were killed after a gas truck exploded at a children's hospital in Cuajimalpa, a borough of Mexico City.
SHOW TRANSCRIPT

At least two are dead after a massive gas explosion in Mexico City damaged a nearby maternity hospital.

The blast happened in Cuajimalpa, a borough located in southwest Mexico City. Local officials now say at least seven people are dead including three children. The hospital is reportedly about 30 percent to 40 percent destroyed. (Video via Excélsior TV)

"Look at the level of devastation and destruction that this has caused. Children's hospital. At least 54 injured. Twenty-two of them confirmed are children," MSNBC's Jose Diaz-Balart said.

In an interview with local news outlet Noticias MVS, borough Mayor Adrián Rubalcava says a gas truck supplying fuel to the hospital was getting maintenance when it exploded.

Rubalcava also sent out a series of tweets calling the situation and the explosion "grave."

"People have volunteered at the site, carrying buckets of water, putting out some of the fires that you see there. This could get worse throughout the day," Al Jazeera reporter Adam Raney said.

Stay with Newsy for updates as the story develops.