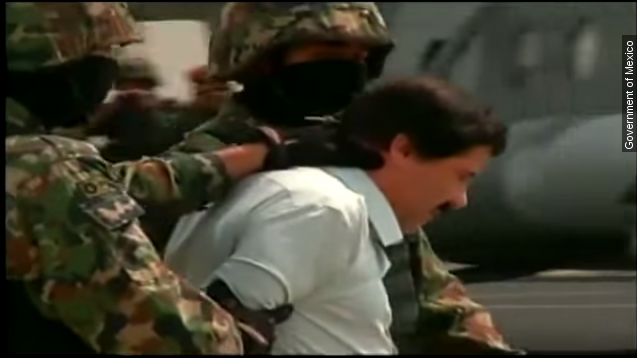 And as much as his most recent capture in 2014 helped the image of Mexico's anti-cartel efforts, his escape could prove disastrous. (Video via Government of Mexico)

Especially for Mexican President Enrique Pena Nieto, who has already seen massive protests against him this year, sparked by allegations of corruption, often linking government officials to cartels. (Video via Government of Mexico, CNN)

His government has made a big show of capturing cartel figures, which makes their escapes all the more painful.

El Chapo is probably the highest-profile cartel leader to escape prison in recent years, but prison breaks in Mexico aren't all that uncommon.

In 2012, more than 130 inmates escaped a major prison in northeastern Mexico and killed more than 40 other inmates. Officials linked the escapees to the notorious Zeta cartel, and nine guards confessed to helping them escape. (Video via Cadenatres Noticias, ABC)

It's not clear if guards were involved in El Chapo's latest escape, but in a press conference, a security official detailed how he might have gotten out, and the plot is pretty elaborate. (Video via Telemundo)

"We found a tunnel a little more than 5 feet tall and 2.2 feet wide ... stretching for more than 1.5 kilometers ... and we found a motorcycle on rails which was probably used to remove dirt from the excavation and transport tools," the official said.

And Guzman has won over guards before. As a writer for The New Yorker explains, during Guzman's first escape, "he bought off the prison staff and enjoyed a life of relative luxury: he conducted business by cell phone, orchestrated regular visits from prostitutes, and threw parties for favored inmates."

That same writer today noted a tunnel seems like a painfully obvious choice for Guzmán, seeing as he, "*invented* the border tunnel. His cartel dug 100+ tunnels under the border." And, "He escaped marines last Feb thru a tunnel in his house."

The maximum-security prison where Guzmán was held is just half an hour from the major city of Toluca, which could make it a lot easier for Guzmán to disappear, yet again.