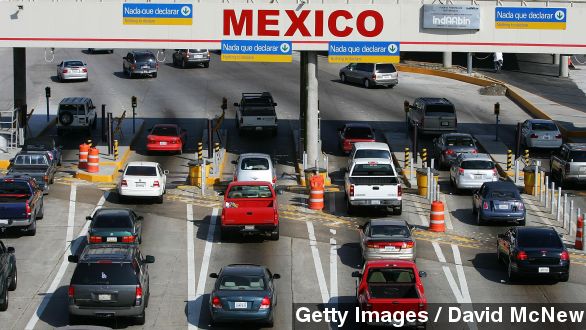 The Mexican government has released U.S. Marine Andrew Tahmooressi after he says he accidentally crossed the California-Mexico border carrying military-licensed firearms in his truck eight months ago. Tahmooressi boarded a flight for Miami Friday night after all charges against him were dropped. (Video via KGTV)

His mother Jill had to take to Facebook to request nonviolence after they began talking of staging a rescue attempt.

But reports from Mexican media outlets were skeptical that Tahmooressi's arrival in Mexico was an accident.

According to Mexican outlet El Universal Mexican authorities said Tahmooressi had actually crossed the same border checkpoint on three different occasions before the incident that led to his arrest.

And Mexico's Zeta reports a source told them Tahmooressi had an established relationship in Tijuana.

But those reports didn't stop American media outlets from firing back, including Fox News.

BILL O'REILLY VIA FOX NEWS: "Sgt. Tahmooressi is suffering from post-traumatic stress disorder and surely, surely, the Mexican president could grant him clemency."

That was part of an impassioned plea from O'Reilly to get Americans to boycott Mexico not only because of Tahmooressi's imprisonment, but also because of the country's perceived inability to protect children from smugglers.

Unsurprisingly, Mexican media outlets were angry with and dismissive of O'Reilly's call to action.

A writer for the English language Vallarta Today commented, "Whether it's immigration, or the arrest of Americans who broke Mexican laws, or heartburn that flared up suspiciously after consuming a Fiery Doritos Taco Supreme, O'Reilly is inconsolable."

After all the media attention, Tahmooressi is now seeking privacy to receive treatment for post-traumatic stress disorder.