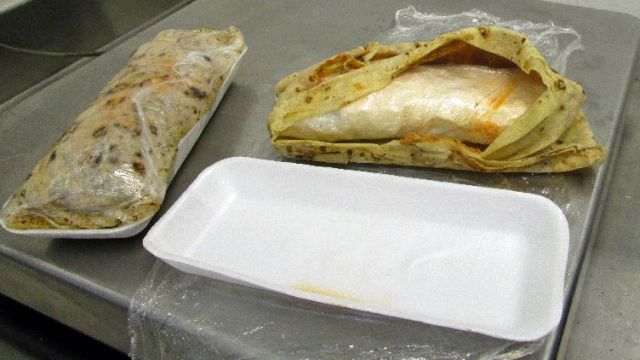 SMS
Those Aren't Burritos; That's $3,000 Worth Of Meth
By Matt Moreno
By Matt Moreno
May 25, 2016
U.S. Customs and Border Protection agents in Arizona say they recently seized meth disguised as a bag of burritos.
SHOW TRANSCRIPT

U.S. Customs and Border Protection agents in Arizona say they recently seized some meth disguised to look like a bag of burritos.

Customs agents say on May 20, a 23-year-old woman reportedly tried to pass from Mexico into Arizona with the faux burritos. She attempted to enter the state at the Port of Nogales when a drug-sniffing dog found the meth, which officers say weighed over a pound and is worth about $3,000.

Court documents obtained by The Smoking Gun say the woman, Susy Laborin, admitted to trying to smuggle the drugs across the border, saying she'd be paid $500 for the job after delivering them to a "unknown third party."

According to the court documents, Laborin is a citizen of the United States.

The arrest was one of many at that border stop recently. Agents also discovered several other cars allegedly carrying pounds of meth, cocaine and heroin. In all, about $1 million worth of drugs have reportedly been confiscated since Friday.

And this is definitely not the first time someone has tried to disguise drugs as food. Customs agents have seen everything from marijuana carrots to cocaine tamales.

There's even been things like opium soap and even a modern Trojan horse carrying 29 pounds of cocaine.

According to U.S. Customs and Boarder statistics, marijuana is the most seized drug at the border. It's followed by cocaine, meth and heroin respectively.